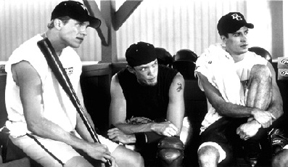 Add Summer Catch to the long list forgettable movies for the year.

The by-the-numbers, cliché ridden, jock finds love and the strength within story has a few inspired moments  very few  but in the end its just another ho-hum summer movie.

Theres nothing here you have not seen before, unless you have never seen a sports movie. Then the story about a young local athlete (Freddie Prinze, Jr.) trying to be successful, but fighting self-destructive tendencies, family and privileged outsiders might actually have an once of originality.

Prinze plays a hot college pitcher with a bad attitude. Hes a screw up who does not think rules apply to him. His big chance to prove he can do things right comes when hes invited to participate in the Cape Code Baseball League, which is made up of college all-stars competing in front of pro scouts.

He and his friends grew up watching future big leaguers since they live on the Cape. His father (the craggy-faced Fred Ward) has a landscape business so Prinzes character has mowed the baseball field he is now playing on since he was a kid.

As with most formulaic films, there is standard group of characters. Theres a party-boy surfer played by Matthew Lillard. Brian Dennehy is a rough, gruff, but fair coach. Theres a shy virgin that is being perused by his housemother. (Can we say male fantasy?) Theres a villain who is always trying to get our hero in trouble. Theres a mean rich guy (the always efficient Bruce Davidson) who reminds Prinze that he is blue collar.

Theres an incredibly beautiful girl who falls for the hero for no valid reason. And in the mix are a couple of minorities, for good measure.

Please, baseball is a pretty mixed bag racially speaking, but theres little evidence of that in Summer Catch. Fat girls are predominately featured, though. Isnt that nice? It is strange; most of the movie makes fun of girls who actually look like they eat  unlike the female star Jessica Biel  but in the end one of the guys makes an impassioned speech proclaiming his desire for chunky girls. How enlightening.

There are some funny lines. Prinze is likable, even when being a jerk. The older cast is comprised of fine character actors doing more than competent work considering the script.

Too many things dont add up and what does comes off as shallow and superficial. Apparently, it is too much to ask to have real emotions and three-dimensional characters in movies this year.
Why only one scout, out of many, detects our heros talents makes no sense.

For one thing, he pitches out of the stretch all the time. Brittany Murphy appears to be his loving girlfriend at the beginning of the movie yet she steals his clothes for no good reason  other than to set up a silly situation. With little explanation, she is not his girlfriend, but does attract attention from other players for her ability to pour beer without her hands.

The humor and situations range from innocent juvenile Mighty Ducks stuff to nearly American Pie sexuality, even though Summer Catch is rated PG-13. Rent Bull Durham instead. Or the first Major League. Rated-PG-13