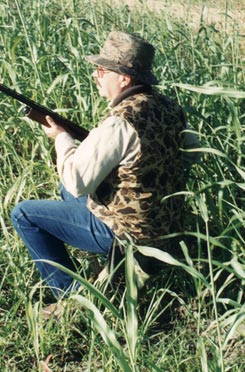 The first shotgun blast at a fast flying mourning dove just after dawn on Saturday will mark the beginning of the hunting seasons in Texas.

Most hunters, myself included, are still trying to adjust their thinking to the fact that dove season is here. The official opening of the Central Zone (north of 1-10) and the North Zone begins 30 minutes before sunrise on September 1st.

Dove hunting in Texas is a social affair. All it takes is a folding stool, a couple of boxes of low-brass shotshells, an ice chest with bottles of something cold, and access to a small piece of land over which dove might or might not fly.

Wherever the opening morning of dove season finds you, and no matter how many times you have been through the drill, a few basic reminders are in order. During the excitement of an opening day dove hunt, be sure and dont forget the right stuff.

Open choked 12-gauge shotguns such as improved cylinder or skeet chokes are the usual choices for casual shotgunners. Number 7 1/2 and 8 shot are fine for downing doves. Most dove are taken within 30 yards and any shot past 40 yards is risky at best. Leave the light gauges, the tight chokes and the long shots to the expert shotgunners.

Take up a good position in the field. The typical drill is to stand or sit along a perimeter brush line and snipe at birds entering or leaving the feeding field. This works well, assuming the shooter has a reasonably clear vantage point to spot incomers and mark the fallen birds.

If the perimeter is screened, do not hesitate to move at least 50 or 60 yards into the field (far enough to clear long falls from perimeter brush or fence lines). A single tall shaft of grain or a clump of weeds can provide legitimate cover for the hunter in the open who dons camouflage and remains low and still as birds approach.

A dirt levee or low depression also might provide adequate protection. Being able to watch all quadrants and spot approaching birds well in advance can make a huge difference when each chance must count.

Always recover your hulls from the field. Retrieving ejected shells may not always be necessary, but it is a polished act to cultivate. At best, abandoned shotshells are plastic litter; at worst, they might constitute a hazard to munching livestock.
Double guns are easiest to monitor. Most models feature automatic ejectors that fling the spent hulls several yards when the action is broken, but the hunter can train himself to palm the hulls as they kick free.

Autoloaders can be pretty careless, spitting ejected hulls left and right with no conscious effort from the shooter. However, the dove hunter waiting on stand can at least monitor the near ground and retrieve most the shells after the hunt.
Make a valiant effort to mark and find every bird you shoot. This discipline cannot be stressed enough. No matter if a field champion retriever backs you, strive to watch each bird down and lock on the precise spot. This self-sufficient practice eventually will recover a bird that otherwise might be lost.

This rule applies even to close falls on open ground. It is astounding how brown dirt clods and gray corn husks can swallow a dusty dove  especially is the bird falls with wings together and few, if any, trailing feathers. A half-hearted effort to find a downed bird with the uncaring attitude of its just a dove wont cut it with ethical sportsmen.

Carry plenty of water into the field. Traditionally, the opening weekend of dove season in September is still plenty hot. Texas is not known for its cool Septembers. Heat and dehydration are certain to follow the unthinking dove hunter who ventures into the field without taking a supply of cold water.

Some of the best dove hunting Ive ever had occurred during the very hottest part of the day. Make a point of drinking an ample amount of water just before entering the field. Its also very helpful to keep an extra plastic bottle tucked away in your hunting vest or game bag. This way, you can sip cool water during the hunt.

Regardless of how many dove I end up with in my hunting bag, I will consider my trip afield a success if I can celebrate the opening of another hunting season and watch a few flights of speedy gray dove darting across a September sunset.