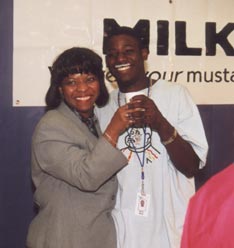 Aldine Ninth Grade principal Doris Delaney and her school were one of 50 schools nationwide selected to spread the word on the importance of students getting more calcium in their diets when the Aldine ISD school participated in Bone Up On Calcium week, September 10-14.

Bone Up On Calcium week is a new calcium campaign between the American Academy of Orthopedic Surgeons and the Got Milk?/Milk Mustache campaign.

Delaney pledged to help promote the importance of getting the recommended daily intake of calcium by encouraging students to choose milk more often.
As educators we know kids do better in school when theyre nourished. So, Im pledging my calcium commitment by asking my students to make calcium count everyday and to do what I can to show kids that milk is cool, Delaney said.

At school, lunchtime used to be milk time, but these days that is not always true. In fact, teenage diets are dangerously low in calcium. Nearly 90 percent of teenage girls and almost 70 percent of teenage boys fall short of current recommendations: 1,300 mg per day, or the equivalent of about four glasses of milk. Health professionals, including the American Academy of Orthopedic Surgeons, are concerned this chronic calcium deficiency is creating lifelong damage, including the risk of stress fractures now and osteoporosis in the future.