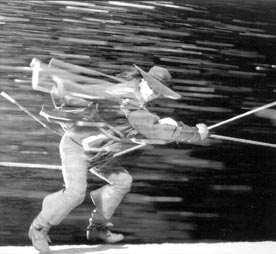 The Musketeer is basically a poorly acted, poorly directed film, but some spectacular fight scenes and the presence of the legendary, and still stunning, Catherine Deneuve make it worth a watch  if you care about such things and have little else to do.

If you are going to update a classic  approximately nine movies have been made from the Alexander Dumas The Three Musketeers, at least a couple of them competently  you need to make it fresh and exciting, not just intermittently exciting.

The sword battles and gravity defying stunts that highlight The Musketeer are well executed and awe inspiring, but unfortunately, you also have to sit through drab, stilted dialogue, a tired story and grainy film with too many dark, fast cuts. It takes a while to get a good look at the supposedly handsome young star.

The movie starts with the young DArtagnan vowing to avenge his parents murder by the evil Febre, played well by Tim Roth. His heartless villain shtick is getting old, though  Rob Roy, The Planet of the Apes and now this. Well. At least hes good at it.

Justin Chambers, a former model who was recently in The Wedding Planner, plays the grown up DArtagnan. Hes learned his craft well and is ready, willing and able to save women and children as he works to become a musketeer and kill Febre, Cardinal Richelieus (Stephen Rea) henchman.
As far as I could tell, Chamberss biggest talent is having a lovely body.

Following tradition, DArtagnan meets up with Porthos, Aramis and Athos, musketeers who have been dismissed as the kings guards because of an incident carried out by Febre. The older musketeers only welcome DArtagnan after hes proven his prowess at fighting.

DArtagnans prowess with women is less evident as he bumbles around the lovely chambermaid, played by the lovely Mena Suvari, who was so much better in American Beauty and American Pie 2.

The always joy-to-watch Deneuve (who gets top billing) brings much needed class to the production as the Queen of France. Her part is small, but shes better than the role, actually better than the movie  which begs the question of why she bothered.

The real star of The Musketeer is Xin-Xin Xiong, the veteran stunt coordinator from Hong Kong. The scenes he choreographs are a step above the rest of the film  other then the few scenes with Deneuve. The final fight that takes place on numerous ladders, is alone, almost worth the price of admission. And any fans of old westerns will surely enjoy the breakneck antics on a stagecoach.

Director/cinematographer Peter Hyams continues the hack status he earned making The Presidio, The Relic and End of Days and many other forgettable films. Rated-PG-13 for intense action, violence and some sexual material.