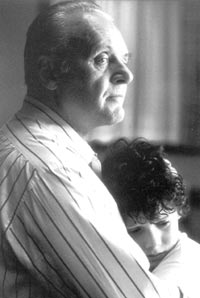 First, lets get the negatives out of the way.
Whatever you do, dont watch the commercials for Hearts In Atlantis. The commercials make Hearts look like its strictly sap and supernatural. Its not. Plus, too much of the plot and magic of the film are given away in the commercials.

Also, Hearts In Atlantis is a poor and meaningless title for a movie. It might have worked fine for the Stephen King book, but those not familiar with the novel could be think the plot has something to do with the mythical city. It does not. Or horrors, they could associate this movie with Disneys lame Atlantis.

Now to the positives: Summer must be over, because Hearts is actually a movie with depth and emotion  a movie worth remembering.

Hearts does have supernatural elements like Kings The Green Mile, but not as much. Its even more reminiscent of his nostalgic boys adventure Stand By Me.

As with those two movies, Hearts is framed by contemporary scenes. David Morse plays the main character, Bobby, recounting the summer of 1960. We flashback to Bobbys 11th birthday, his adventures with friends Sully (Will Rothhaar) and Carol (Mika Boorem), and his relationship with the mysterious border Ted (Anthony Hopkins).

Anton Yelchin is excellent as the young Bobby. Yelchin resembles a large dark-haired Botticelli angel (he has the belly), but acts like most 11-year-old boys. Hes both tough and sensitive. He longs for adventure, friendship, security and the expensive bike displayed on a revolving pedestal in the store window.

Bobbys mature beyond his years. His dad died years ago and mom (Hope Davis) has a demanding boss so he often takes care of himself. Hes not even surprised when mom calls to cancel his birthday dinner out.

The young man longing for a father figure does not have to spend as much time alone once the kind but rather strange Ted movies in. Its Hopkins who makes Hearts truly memorable. He quickly makes you forget he was ever a cannibal. Hopkins exudes warmth and intelligence while just sitting in a chair talking about the joys of an adult library card.

Ted has Bobby looking out for low men, thugs, who are after him. It is not clear if Ted is totally sane or healthy  he has spells  but it is clear that theres a bond between him and the boy.
The plot is rather simplistic, a boy and his memories about a favorite year and the people in it  with a little supernatural thrown in to heighten suspense. There is a sense of foreboding because of Teds mysterious ways and the people who may, or may not, be after him.

Hopkins never makes a wrong move. The same cant be said of Davis, who is supposed to be shrill and unlikable, but pulls it off too well. Her character is awful, straight out of Dickens. Her part may be small, but its crucial so youd think shed be more interesting than Davis plays her.

Scott Hicks (Shine, Snow Falling on Cedars) directs with grace. The movie has a Norman Rockwell look and is well paced.

Engrossing, suspenseful and sweet, but not sappy, Hearts In Atlantis is the first worthy movie of the fall. Lets hope its not the last. Rated-PG-13 for violence.