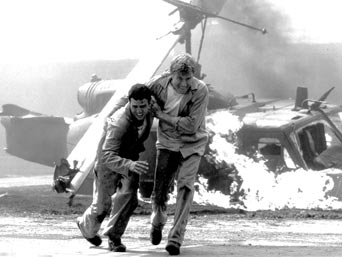 The prison drama The Last Castle stars Robert Redford, but it has an old-fashioned feel to it so its not hard to imagine Steve McQueen or even John Wayne in the lead.

Old fashioned can also be another way of saying it has a timeless quality. The Last Castle is the type of movie that any generation can identify with.

The events of the last few months make Castle especially resonant for our times. The good guys are heroic, but flawed. The bad guy is especially evil, yet has supporters. The conflict is exciting, but there are times to be quite and mourn those lost.

Castle will most likely make you feel patriotic and supportive of the military. It works so well that even nasty inmates in a military prison exemplify the best of what makes a soldier. According to Castle, working together to defeat the enemy, listening to good orders  as opposed to bad  and supporting your comrades is what makes a fine soldier.

Castle makes a fine movie because the story is strong, as is most of the acting, and the action and suspense are as believable as one can expect from this type of movie.

Redford is stoic. Yet, he shows warmth and humor as a three star general who is sentenced to the brig for ten years. Why hes there is part of the suspense of the movie  I dont want to spoil it, so go find out yourself.

We do learn early that hes famous as a leader and strategist. These qualities come into play before long. Because hes so used to observing and taking everything in, it does not take long to see that the warden, Colonel Winter (James Gandolfini, best known as Tony Soprano), is a manipulative control freak with sadistic tendencies.

Im not fighting anyone, anymore, Redfords General Irwin says, but natural leaders cant help but lead, especially when followers want a figure to look to. There is no saluting and all prisoners are striped of their ranks, but soon the other inmates are gesturing in a way very much like a salute and calling Irwin chief.

Irwin finds himself molding the men into the soldiers they should be. He just cant help it. But he still does not want to butt heads with the warden.

It takes someone dying for him to realize it is up to him to protect his men. He needs the redemption, as do the other inmates.

Its not surprising that they make amends, even the ones who arent looking for it. How well the filmmakers pull it off is a little surprising. Its edge of your seat exciting and emotionally satisfying, whereas it could have been sentimental and manipulative. Or maybe it is and I just wasnt in the mood to see that way.

Everything in The Last Castle is not perfect, including the definition of what a castle is and the obviousness of a certain characters doom. But its rousing and fulfilling and a fine way to spend a couple of hours. The characters, including Redfords, are not fully realized, but theres enough there to care.

Delroy Lindo has a small but effective role. Mark Ruffalo and Clifton Collins, Jr. are featured in the cast full of up and coming faces. Brain Goodman as the muscled Beaupre is especially memorable. According to the press kit for the movie, hes even spent some time behind real prison bars. Rated-R for violence and language.