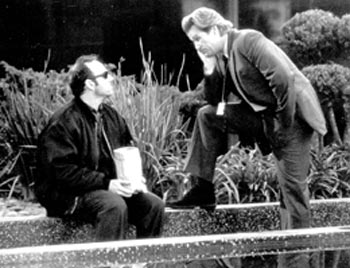 Warning! This review may be a bit uneven and unsatisfying  just like the movie its about K-PAX.

The movie starts out interestingly enough. The Kevin Spacey character appears to materialize out of a beam of light and is quickly carted off to a psychiatric ward when he talks about not needing luggage to travel.

Well Spacey, who won Oscars for The Usual Suspects and American Beauty, is such a gifted and fascinating actor its hard not to want to watch him. He commands attention as the strange Prot, supposedly from the planet K-PAX.

For a while it is interesting trying to figure out, along with Dr. Powell (Jeff Bridges), if the kind-eyed Prot is a wee wacky and living in his own little dream world or really from K-PAX.

But slowly other thoughts start to come to mind. Like where the heck is this movie going? I suspect the filmmakers were not sure themselves. K-PAX seems to be an arent-mentally-ill-people-noble-and-really-better-than-the-rest-of-us film, but then it turns into a mystery involving murder and then fanciful elements.

Fanciful elements are used so the whole thing does not have to make sense, and few explanations are needed. The take-it-as-you-like ending is sure to tick some people off.

Yet, it could also please those who actually buy into the whole duel scenario. Sorry, that statement cant be explained without giving away the end. Wouldnt want to do that.

The relationship between Bridges, who does a fine job in a mostly understated role, and his wife, the pretty  and of course much younger than him  Mary McCormack, is worth watching. How does a man who has to listen to people talk all day leave his work behind and focus on his family? This problem is alluded to, but goes mostly unexplored in favor of featuring the quirky cast in the mental hospital.

Weve seen these people before in movies such as One Flew Over the Cuckoos Nest, Patch Adams and The King of Hearts. K-PAX offers little new.

Other than where this movie is headed, questions about why Spacey, Bridges and Alfre Woodard would be involved came to mind. Maybe on paper K-PAX looked less like an uneven, unfair, well-meaning TV movie of the week. You have to figure they would not have signed on unless the venture looked better on paper. Something must have got lost in translation.

Director Iain Softley also made the uneven, yet intermittently interesting Backbeat (about the fifth Beatle) and his Wings of the Dove, shares the same characteristics  which is more understandable since its from a Henry James novel.
Spacey probably thought playing a mentally ill person was too juicy to pass up. He does act his heart out. He makes you believe anything is possible, but then the direction and script undermine his work. Youve got to give him credit for making Prot intriguing instead of ridiculous, which he probably would have been had another actor had played him  like say, horrors, Robin Williams.

Unfortunately in K-PAX the parts do not add up to a whole and one is likely to be rather bummed out and unsatisfied even though there are some fine scenes and adroit acting.

Rated-PG-13 brief sensuality and language and some violent images.