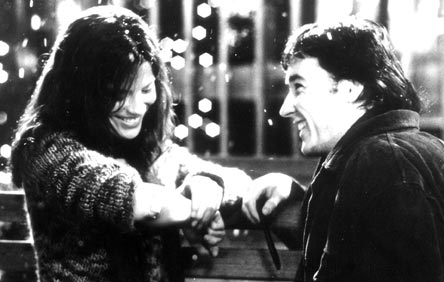 The premise in the movie Serendipity, that fate alone will bring two people back together, while strictly ridiculous, makes for a fine romantic comedy.

As ridiculous as Serendipity is, it is delightful escapism and sure to please the romantic in all of us, even if part of you goes … Oh, please. Youll also go Ah, sweet.

Romantic comedies are judged like no other genre of film. If the couple seems right, if theres a spark between the characters, as well as the audience, we will forgive the movie much. With Serendipity its not hard to forgive the illogical  like finding an address just by typing in a common name  because we really want them to be together.

Much is forgiven because the two main actors and the supporting cast are all appealing. The music is snappy and romantic and New York looks great (Maybe you can tell where the Twin Towers were digitally removed?). Serendipity is laugh-out-loud funny and crowd-pleasingly romantic.

John Cusack (High Fidelity, Being John Malkovich) and Kate Beckinsale (Pearl Harbor) meet cute as they both grab the same pair of gloves.

There is instant attraction, but they are both involved with other people and decide to go their separate ways. Fate, or in this case forgotten items, soon bring the two together again. They spend some more time together and Cusack cant help but to pursue Beckinsale.

She is a strong believer in destiny and thinks that even if she does not tell him who she is, or her phone number, they will meet again if they are meant to be together.

For those of us who know how cruel fate can be, this seems very fool hardy. As it turns out, it is. Years later Cusack, still in New York, and Beckinsale, in San Francisco, have yet to meet again. Still, both often think of that great night spent ice skating, drinking coffee and talking. They remember, yet both are on the verge of getting married.

Cusack is days away from marrying a lovely lady who looks a little like Beckinsale. I felt a little sorry for his fiancée (Bridget Moynahan) because though she seemed sweet, I knew she was destined to have her heart broken.

On the other hand, Beckinsales guy, John Corbett (Sex And The City, Northern Exposure), is rather strange and somewhat self absorbed, so who cares about him.

The plot is sweet and predictable, even though there are moments when you might think that just maybe this is not going to have a perfectly happy ending  but its just for a few seconds.

Cusack, with his hound-dog face and expressive eyes, is as charming as hes ever been. Beckinsale is lovely with her lilting British accent, but she lacks the girl-next-door aura that Julia Roberts, Meg Ryan and Sandra Bullock have down pat. But they cant be in every romantic comedy, can they? No. So Beckinsale is perfectly fine.

Corbett is there to laugh at and it works. As usual, Jeremy Piven (Rush Hour 2) is also good for some laughs. Also memorable is the always funny Eugene Levy (American Pie 2, Best In Show).
Molly Shannon (Superstar, Saturday Night Live), Beckinsales best friend, actually acts mature and only has a few funny moments.

Rated-PG-13 for language and one sexual scene.