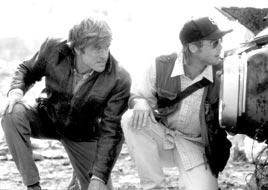 Spy Game is an entertaining set piece for the star match up of two of Hollywoods premiere blond pretty boys, Robert Redford and Brad Pitt.

The craggy, but still handsome Redford plays mentor to Pitt who is finally losing some of boyishness. Not that the duos looks play a big part in Spy Game.

But it obviously was a coup for director Tony Scott (Crimson Tide, Enemy of the State) to get Pitt and Redford because of their star power, which would appeal to a wide range of people  young and old.

It helps that the two can do more than look good and be charming when given decent material. Thankfully, Spy Game is just such material.

It doesnt help that Scott almost messes up the taut, intelligent script with dizzying quick cuts, superfluous freeze frames and too many types of film stock and unnatural lighting.

Try to ignore those aspects of the film along with the unnecessary times stamped on the screen to tell us the clock is ticking down. Thats a literary devise best handled another way in movies.

Time is a major factor in Game. Redford is Nathan Muir, a veteran spook down to his last day on the job. His last 24 hours are spent explaining Tom Bishop, one of his star pupils, to stuffy, very serious suits at CIA headquarters. They care about Bishop, played by Pitt, because hes being held prisoner in China after trying to free an inmate there.

Bishops mission in the prison – the exciting opening scene – was not authorized by the agency and his capture is an embarrassment in light of an upcoming presidential visit. So the agency wants to deny his existence and let the Chinese execute him in 24 hours.

Its a game of the suits against the grunts. The agents in the field know how to do dirty work. They have to face the people they are about to play as suckers or let loose to the bad guys  or kill. Suits do this while sitting behind soundproof doors in front of television or computer screens.

Muir has spent years being callous, but has mellowed in his last days and does not want the agency to give Bishop up, but he cant tell them that, so he must play his cards very close to his nose and be ultra cool and calm while doing it. This is not easy because even though they all wear nearly identical black suits, theyve had some spy training too. Plus they are all, including Muir, very paranoid  not that thats always a bad thing.

There are numerous tense, exciting scenes as Muir recounts the 16 years hes known Bishop while in Vietnam, East Germany and Beirut, but the narrative is dialogue driven. The talk never gets boring because of the snappy dialogue and performances that let us know there is a lot more going on than meets the eye.

The times we live in help make the whole espionage genre a bit more interesting. These are not James Bond figures running around with gadgets making quips. These spies are in realistic danger as they play their life and death games.

Theres a lot of good stuff in Spy Game, – especially if you like the genre – but it could have been much better. On top of the excesses of the director already mentioned, a little motivation would have been nice.

With all it has going for it, it does not seem like it would have been hard to add some more depth.
Oh well, its still entertaining and would make a good companion to the recent Heist for those who want more adult fare than Harry and Monster.
Rated-R for language, some violence and brief sexuality.