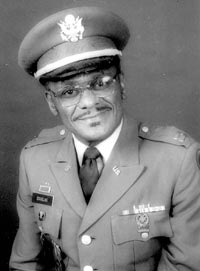 Captain Charles E. Douglas of the United States Armed Forces, graduated as valedictorian of the 1965 class of B. C. Elmore Senior High School of Houston, Texas. He was President of the Association of the United States Army Student Chapter R. 0. T. C. and President of his Senior Class at Prairie View A & M University of Prairie View, Texas. He graduated from Prairie View A & M University in 1969, with a Bachelor of Science degree concentrating in Electrical/Electronic Engineering and was commissioned as a Second Lieutenant in the U.S. Army. After graduating from college, he entered into the U S. Armed Forces as Second Lieutenant (U.S. Army Signal Corps). Shortly after he was stationed at Fort Gordon, Georgia and Fort Bragg, North Carolina where he was a Communications/Electronics Instructor and Signal Unit Commander, respectively. He later received orders to be stationed at Long Binh, Vietnam, where he was a Combat Unit Signal Commander in charge of Operations. He was awarded the Army Commendation Medal of Honor for Meritorious Service against hostile enemy forces in the Republic of Vietnam. Prior to his Honorable Discharge, Lieutenant Douglas was promoted to Captain. Recently, Captain Douglas earned a Master of Education degree from Texas Southern University of Houston, Texas. Currently, he is a Licensed Professional Engineer with a successful Engineering and Consulting Firm, a certified Educator in Mathematics and Science, an Evangelist Minister of the Christ of Jesus Christ From God and he is working on his Ph.D. degree from Cambridge State University of Honolulu. Hawaii.

Since the birth of our nation, Americans have been in the struggle to protect, preserve, and make more meaningful the ideals of freedom and liberty. From the very beginning, the Black American has been part of this struggle and a valiant fighter in every conflict in our history.

Negro soldiers, about 5,000, both free and slave, served gallantly in the Revolutionary Army. Others served in the Navy, especially as coastal pilots. Crispus Attucks, a runaway slave who fled to Boston, was involved in the Boston massacre. He and three other men fell there, the first blood for independence that was shed.

During the war of 1812, the Louisiana Free Men of Color and San Domingo Free Men of Color were integral parts of General Andrew Jacksons Army, which was rather small and included Blacks and whites. It inflicted a decisive defeat upon an army of British regulars, compelling it to withdraw front Louisiana.

During the Civil War, there were almost 180,000 Negro troops on the union side. Two of the significant Negro regiments were the 54th and 55th Massachusetts. Black Troops fought both in the Eastern Theater and as far West as Kansas and Missouri. Regiments of free Negroes from Massachusetts fought in some of the bloodiest battles of the war, particularly at Fort Wagner in South Carolina. Several regiments of free Negroes even offered their services to the Confederacy and. in the late part of the war, the Confederacy considered giving slaves their freedom in return for military service.

Negro units were instrumental in the Spanish-American War. The 9th Cavalry gained distinction in the charge up San Juan Hill by Teddy Roosevelt and his Rough Riders. During the Philippine insurrection, the same four Negro regiments that fought in the Spanish-American War, along with two volunteer units, fought bravely to quell the Philippine insurrection.

In World War I, the bulk of the 404,348 were Black troops in the Services of Supply – in quartermaster, stevedore and pioneer infantry units. The all-Negro 369th Infantry Regiment was the first American unit to break through the German line and reach the Rhine River. Henry Johnson and Needham Roberts, two members of this unit, were the first two American soldiers ever to be honored by a foreign government for outstanding bravery on a foreign battlefield. Individually they were awarded the coveted French Croix de guerre, with Star and Palm, for defending and holding an exposed position, while wounded, in the face of overwhelming odds.

During World War II, on March 15, 1942, Sergeant Alouzo Douglas was credited as the first Negro infantryman to kill a Japanese enemy soldier in the Solomons. Almost 100,000 Negro troops and 7,700 officers served in World War II. Three Negro armored units and nine separate Negro field artillery battalions served in Europe. Lieutenant Charles B. Hall of the Army Air Corps was awarded the Distinguished Flying Cross and credited with the all-Negro 99th Fighter Squadrons first aerial victory after he destroyed a Focke-Wulf 190 in aerial combat on July 2, 1943. Lieutenant Colonel Benjamin 0. Davis, Jr., (West Point class of 1936, the son of the first Negro general) commanded the 332nd fighter group that flew bombing missions in Europe and while attached to the 15th Air Force made a 1,500 mile round trip attack on Berlin, the longest mission of the l5ths history.

A Black seaman, Doris Miller, became the first hero of World War II. He was a Messman 1st Class serving aboard the U.S. Arizona when the Japanese attacked Pearl Harbor. During the ensuing assault, Miller shot down at least four planes until his ammunition was exhausted. For his distinguished devotion to duty, he earned the Navy Cross.

The Korean War saw the advent of integration of the American Armed Forces. Private First Class William Thompson of the 24th Infantry was the first Negro since 1898 to win the Medal of Honor for martyrdom beyond the call of duty.

In yesteryears, White and Black men fought side by side in Vietnam to preserve the freedom of a country imperiled by Communist aggression. The Medal of Honor rolls are filled with Black and White Americans who have fought courageously in Southeast Asia. These Americans had little regard for their personal safety in performing feats of heroism in protecting the lives of their fellow soldiers. The past Secretary of the Army, Stanley R. Resor, during the Vietnam War said that the policy of equal treatment and opportunity, in addition to being a just one, has paid dividends to the Army. Today we have over 5,500 Negro Army officers. Among infantry sergeants – the backbone of our combat forces in Vietnam – 24 percent were Negro.

Brave Black men have also fought in the Desert Storm War preserving the right to protect the welfare of Americas home front, near and far. General Colin Powell, U.S. Army Five Star General, during the Desert Storm was the first Black Joint Chief of Staff reporting to the President of the United States. Now, Secretary of State Colin Powell is the first Afro-American in charge of the United States foreign and domestic affairs under President George Bush, and he is the first Afro-American to be appointed to such a high cabinet post.

The Black American has fought for hundreds of years for his freedom from slavery and then continued to fight aggressors who sought to take away his American freedom. Perhaps an anonymous Swiss officer serving with the Union Army in the Civil War said it most aptly concerning the Negro heritage, It is beautiful to fight for an idea that is to bring freedom to all men; attractive is the satisfaction, which each brave soul brings with him out of hot combat to have contributed his bit to the success of a beautiful cause.