“Monsters, Inc. scares up some laughs 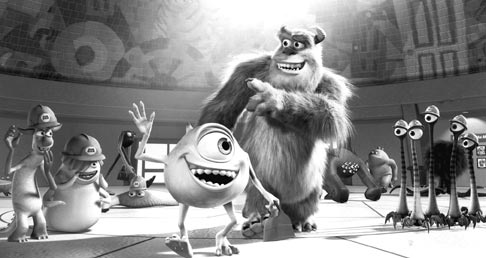 “Shrek is still the front runner to win the first Oscar for best-animated feature, but the charming and clever Monsters, Inc. is worthy of a nomination.

Monsters, Inc. may not be quite as satisfying as the other three movies made by Pixar for Disney, the two Toy Storys and A Bugs Life, but its darn fine family entertainment.

In the land, planet, or whatever, of monsters, childrens screams are energy. It is the Scarers job to go through magic closet doors into childrens rooms at night and elicit the loudest, most terrified sounds possible. The screams are stored in canisters connected to the doors and later used to run the entire monster world.

Sully (voiced by John Goodman) is the best Scarer there is at the power company Monsters, Inc. He has a slinky, slimy rival in the form of Randall Bogg (Steve Buscemi), who is not above cheating to achieve better statistics than Sully.

The companys motto is We scare, because we care, but the problem is  human kids just dont scare like they used to in the good ol days. There are threats of rolling blackouts in Monsteropolis and the crab-like CEO (James Coburn) of Monster, Inc. is desperately afraid the venerable company could go under.

One of the best scenes in the movie has the Scarers striding into the scare room in slow motion just like the heroic astronauts in The Right Stuff. That joke is strictly for movie savvy adults. But there are plenty of other gags for all to enjoy.

Sullys friend and scare assistant is Mike Warowski (the very funny Billy Crystal). Its amazing how many expressions can come from this stumbling, neurotic green ball with one big eye. Purple and turquoise Sully is the top Scarer, but he seems more like an affable teddy bear than a frightful creature. But his numbers dont lie  hes the best.

Most of the monsters in the movie do not seem too scary, except for Boggs because hes evil, whereas the others are just doing their jobs. They are more reminiscent of the space creatures in the Star Wars movies and Men in Black than any childhood nightmares.

One of the ironies in the movie is that the monsters are terrified of children  thinking their touch can kill. When a sock is stuck on a returning monsters back there is bedlam and the decontamination team sweeps in to take care of the problem. Its funny, but a little unsettling because of the resemblance to news stories these days.

If a sock can set off panic, think what a toddler can do? For those who know the havoc a toddler can wreak in their normal environments, multiply by 10 and add the terror factor. Fast moving Boo sneaks into the monster world when Boggs is up to no good. Sully and Mike discover her, but dont stay afraid of cute little Boo for long. The rest of Monsteropilis is in a panic when they discover there is a child somewhere in their midst.

By the time Sully and Boo bond there is a sinister plan in motion that Sully must foil to save the little girl and the company.

A chase scene involving thousands of doors being swung like so much dry cleaning is exhilarating. It had all the kids at the Saturday morning screening bolted to their seats. Adults too. The same children did not squirm when theres a lag about midway through. So that might just be an adult opinion.

The ending is predictable, but it does not matter because its so fun much getting there.

Buy stock in Disney, because it has another winner on its hands with Monsters, Inc.. Those furry Sullys and green globular Mike Wazowskis will be flying off toy aisles this holiday season. Rated-G  great fun for everybody