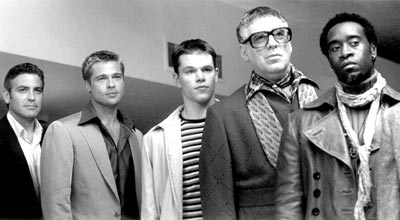 Oceans Eleven is more full of fun than its full of good-looking movie stars  and its packed with some of Hollywoods best and brightest.

Some thought director Steven Soderbergh (Traffic, Erin Brockovich) crazy when he announced he was going to remake  or re-imagine  the ultra-cool classic Oceans Eleven. How could he think to fill the shoes of its stars Frank Sinatra, Dean Martin, Sammy Davis Jr. and the rest of the Rat Pack.

Theres no other like Sinatra, so Soderbergh and George Clooney, in Sinatras role of Danny Ocean, didnt try  they came up with a new, fresh and fun take on an old theme.

Frankly, the 1960 original has not aged well. Its main claim to fame is its cast, not the story or movie as a whole. This version may not have as cool a cast, but Clooney, Brad Pitt, Matt Damon, Andy Garcia and Julia Roberts aint too shabby. They all look great and they act almost as well as they look and dress.

But to be fair two of the most memorable performances are not by the lookers; Elliott Gould is a hoot as a flamboyant ex-casino owner and Carl Reiner is stellar as the veteran con man who is called on to do some crucial acting in the middle of the heist.

The updated version has a plot that moves along at the pace of a craps game  fast – and dialogue that jingles and jangles like a slot machine paying off big.

But there is a time when theres no dialogue and things move slowly. It gives one time to contemplate what has happened. Some might find it boring, but I found it fascinating and lovely. Claude Debussys Clair de Lune plays over a long scene of the dancing fountains in front of the Bellagio Hotel in Vegas. Its an interesting choice in caper flick, but it works.

Other than Clooney, no actor has the same name as the characters in the original, but like the first version, the story does revolve around the heist of Vegas hotels by eleven masters at their crafts. In the first one the guys were WWII friends who wanted to liven up their lives by doing something daring. This time, Ocean has been in prison and wants his wife, Roberts, back. She works for, and dates, Garcia – who happens to own three Vegas hotelsthe three Ocean wants to take millions of dollars from in a daring, slightly impossible sounding robbery.

Within hours of getting out of the pen, Ocean starts hooking up with friends. The closest friend is played by the ever-eating Pitt, who is a poker specialist. Hes so good at reading people he knows when theyre holding or bluffing even when theyre not playing.

Soon the buddies assemble a team to do the big job. Theres the inside man played by Bernie Mac. Don Cheadle (Traffic) is the explosives expert. Damon (The Legend of Bagger Vance) is the young pick pocket with a legacy to live up to.

Every grand heist needs a surveillance expert; here hes played by Eddie Jemison. Casey Affleck and Scott Caan are two bickering brothers who are good at many odd jobs. And an acrobat from Peking plays an acrobat from China who is instrumental in the impossible burglary.

Everybody has a key role in the clever job, but it is Oceans baby and Clooney pulls it off with smooth, smoldering charm. I do not say this lighty Clooney is reminiscent of Cary Grant here.

Oceans Eleven is not grand art, nor does it have some lofty message, but it is pure escapist entertainment at its best. Unlike many movies lately, including even Monsters, Inc. and The Lord of the Rings, Oceans never once made me think of the tragic events of the last months. That alone is recommendation enough. The soundtrack is cool too. Rated-PG-13 for language and sexual content.