Coaching is a family affair for Nimitzs Rowe 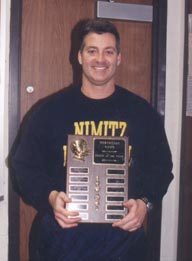 Randy Rowe grew up the son of a Texas high school football coach, and while he has followed in his fathers footsteps, Rowe almost took a different career path.

After graduating from Northwestern University where he played fullThe legal professions loss was footballs gain.

Ill never forget that call from coach Peay, said Rowe, who was recruited to Northwestern by current Minnesota coach Dennis Green. He told me I needed to coach and said I could come work for him as a graduate assistant and he would pay for me to get my masters degree. Coach Peay kept his word. I cant say enough about what hes meant to me and my career.

Thats just what Rowe did and are the Nimitz Cougars ever happy he headed Peays words.

In his second year as Nimitz Highs head football coach, Rowe and his staff led the Cougars to a 9-3 record, a second place finish in District 21 -5A and a bi-district victory over Pasadena Dobie.

It marked the second straight year Rowe had led the Cougars to the playoffs, a feat which had never been accomplished at Nimitz until Rowe arrived. In his first year on the job, the Cougars finished 5-7, but won five of their last district games to qualify for the playoffs.

For his efforts, Rowe, 37, was named the Northeast News Coach of the Year but he was quick to point out that the real credit belongs to his staff.

Our staff has done a great job with the kids, Rowe said. If anyone deserves this honor, its our coaching staff. I dont do nearly as much coaching on a daily basis as those guys do. I deal more with organizational duties, discipline and things like that, so I feel this is a staff award.

Despite his modest approach, Rowe is the man in charge and in less than two years he has brought a new sense of discipline and organization to the Nimitz program. He and his staff have set some simple rules for their players to go by, which they call Cougar Law.

We have four set rules that we expect the kids to follow. They are be on time, do whats right, do your best and treat other people the way you want to be treated, Rowe said. Its pretty basic when you think about it. Were not only teaching these kids about the game of football, but we want them to start thinking about their futures and what will be expected of them when they are adults.

Rowe said growing up he looked up to his father, Wilburn, who was a head coach at a number of high schools in Texas. Other coaching figures who had a profound impact on his life and career were Vince Lombardi, Peay and his high school coach at Livingston High, Bruce Bush.

My father has always been my hero and hes always been my coach, although he never officially coached me, Rowe said. And Coach Peay was so influential in my life. Once I started coaching I knew this is what God wanted me to do and Ive never looked back. Ive read just about every book that was written about coach Lombardi and I think thats where I learned the importance of discipline in life and in a football program and coach Bush taught me the Slot T offense, which we run here. I also learned about the importance of organizational skills and people skills from him.

Rowes first head coaching job came at 28 years of age at Skidmore-Tynan. He coached there two years before moving to Palestine Westwood, where he met his wife Chrystal. From there he moved on to Cleveland High, where he turned a 1-9 team into an 8-3 team in one year. He also led Cleveland to its first playoff appearance at the Class 4A level.

With his wife in school and a baby on the way, Rowe left Cleveland after a year and a half to become athletic director at DeSoto High School, a Class 5A school located south of Dallas. He said the opportunity to provide a better life for his young family was just too much to pass up, but when Aldine ISD officials came calling in the spring of 2000, he was ready to listen to their offer to get back into coaching.

One of the things they asked me about was moving from one job to another and I told them I was able to move from Class 2A, to 3A to 4A and then to Class 5A, he said. I really missed coaching and I assured them this is where I want to be. I dont plan on going anywhere. I love it here.

This is a special time for us as a family. My brother (Grady, who serves as co-defensive coordinator) and I have always wanted to coach together and weve got that opportunity here. My mom and dad live just down the road in Livingston, so they can see us play every week and spend time with our daughter, Katelyn. And I love working with these kids.

Rowe had to hit the ground running when he was given the job in April of 2000. He had less than two weeks to prepare for spring training, meet his new players and assemble a staff. He lived in the field house while his wife finished the school year in DeSoto and also had to find a new home for his wife and daughter. It was quite a six weeks.

But he said the lessons he learned from his father, Peay and Bush helped him make the transition with his new team.

I believe in being yourself, Rowe said. Kids can sense sincerity. They want honesty, equity and discipline. Discipline is not what you do to someone, its what you do for them. I truly believe the biggest part of discipline is love and I hope these kids know we love each and every one of them.

As far as his coaching philosophy goes, Rowe said he believes in a balanced offense and a defense that limits its opponents to less than 13 points a game.

On offense we want to move the sticks, he said. I like balance, but that doesnt necessarily mean you run the ball 30 times a game and throw it 30 times a game. When we throw we want to be successful, even if that means throwing only six or seven passes a game. On defense we want to limit our opponents to less than 13 points a game and we did that this year in district. We had the second ranked defense in the league behind Eisenhower and we only allowed 95 points in seven games.

Looking back, Rowe said hes glad he took Peays offer and became a coach. He said he believes hes truly blessed to be doing something he loves.

As a coach, you can impact young peoples lives and I really enjoy that, he said. Ive got a great life. Im coaching football, working with my brother and living a dream. Plus, I get to spend time with my family and my parents are close by. Those are the things that make me happy.