Not enough magic in The Majestic 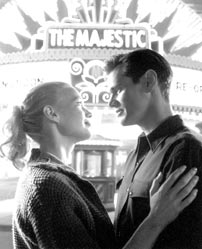 Director Frank Darabonts two beloved films have touches of magic in them. Alas, his third, The Majestic, lacks the enchantment of his other works
In The Shawshank Redemption the magic comes from a perfect cast mixed with a stellar story  lovingly adapted by Darabont from a Stephen King short story  and a finely tuned direction job from the first-time director.

In The Green Mile Darabont again adapts Stephen King. Again, the cast is more than up to the task, even if some of the direction strays toward allusions of self-importance. In Mile magic also comes from super-natural elements within the story.
Darabont has no writing credit in The Majestic.

Unfortunately, its buried in corn, shameless manipulation and sentimentality for most of its two-and-a-half-hours. Darabont and the cast just try too hard to be earnest, no doubt thinking they are doing something important. Theres very little sense of fun; the film is stuck like muck in mawkishness.

Just listen to its star Jim Carrey going on in the commercials as if this movie will save the world.

Well, maybe not change the world, but something almost that big  he goes on as if they have made a Frank Capra movie (Its A Wonderful Life, Mr. Smith Goes to Washington etc.) instead of a Frank Darabont movie. Darabonts a fine director. He should not try to be Capra, cause he isnt and never will be.

Not that its all a waste. Darabont is good enough that there are a few genuinely touching moments in Majestic, the story of mistaken identity, heroism, McCarthyism, familial love, romantic love, finding yourself and, my favorite part, the movies. Majestic tries to do a lot and succeeds at little other than being tedious and manipulative.

No doubt there are some who will buy into the whole shebang and love every sappy moment. The Majestic is that type of movie, you either go with the hokum and let yourself get carried away with the sentimental nostalgia and the positive message its trying to convey or you sit back and think Ive seen this all before and Ive seen it better.

Carrey, who looks good in period dress, stars as a up and coming Hollywood scriptwriter who is living his dream job, in his dream town with his dream girl until the nightmare of communism sweeps the country and hes blacklisted by the House Un-American Activities Committee.

Shortly after losing his job and his girl, he leaves his town to head up the coast. After an accident, the whole stale amnesia plot trick is used for most of the rest of the film. Its 1951 and the thoroughly picturesque town of Lawson is still reeling from the 61 men in lost in WWII.

One of the men was Luke Trimble, a hero much beloved by the small town. When Carrey is brought to town after being found on the beach everybody thinks he looks familiar. Luke was declared missing in action nine years ago. Martin Landau takes one look at Carrey and decides he must be his son Luke.

Most of the people agree, but there are those who dont. Of course, we know its not him so we wait for his memory to return.

No surprise it does, but not until the person who cant remember who he is falls in love (Laurie Holden plays Lukes old flame), helps Landau reopen his old theater The Majestic and brings the town together.

Isnt that sweet? It gets sweeter when he brings the whole country together in a way Im not going to reveal. The beginning and the end of the film feel like different movies than when Carrey is in Lawson. Id rather have seen more of how people in Hollywood dealt with the Red Scare than some silly story about amnesia and a sad little town.