Perkins all-out style is a perfect fit for Eagles 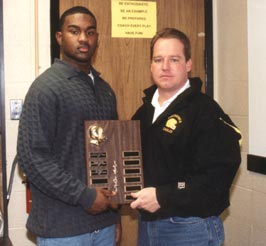 Brandon Perkins is a coachs dream.

The senior defensive end knows only one speed when hes on the football field, all-out. So says Richard Carson, who for the last three years had the pleasure of coaching Perkins at Eisenhower High School.

Perkins, a three-year letterman and two-year starter, had perhaps his best year as an Eagle in his final campaign. The 6-2, 215-pounder recorded 60 tackles, seven sacks, caused four fumbles and recovered three fumbles to help the Eagles when their third straight District 21 -5A title. That sort of performance earned Perkins the Northeast News Defensive Player of the Year award, to go along with being named the Defensive MVP of District 21 -5A (Perkins was also a first-team all-district selection this past season). Perkins was also a Houston Touchdown Club finalist for Defensive Player of the Year.

Perkins also found time to help the Eagles on offense at tight end where he caught three touchdown passes, but it was on defense where he stood out the most, said Carson.

Brandon is just a great athlete, Carson said. Hes very versatile and plays hard on every play. Thats what shows up on film with the recruiters. Hes very fast and quick and he has fun playing the game, which is what its all about.

He is also well respected by his peers, so much so that they elected him captain of the team following spring training in May of 2001.

We changed things up this year. In the past weve named different kids captain for each game, but this year we decided to elect captains for the season. Brandon was voted to be a captain by this team. That tells you hes a end who was recently won the Lombardi Award, which goes to the most outstanding lineman in college football.

His high school coach said another trait which impresses college recruiters is Perkins hustle on every play.

Even when he was young, if he made a mistake he did it going full speed, Carson said. When people see him on film, they realize what kind of talent he is as a defensive player. I think whoever gets him is going to be getting a fine young man and an excellent football player.

In the last 10 years, Eisenhower has produced a number of quality players who have gone on to have solid college careers. One of those is former Eagle Jarrod Penright, who is a starting outside linebacker at Texas A&M.

Penright had a stellar career at Eisenhower and Carson sees some similarities in the two players.
Jarrod is bigger and stronger than Brandon, but they are both very similar in the way they rush the quarterback, Carson said. In the open field, Brandon is probably a better athlete because of his speed and quickness. At any of level of football, you want a guy who can rush the quarterback and Brandon can do that.

Ill tell you who he really reminds me of and thats Bryd Jones. Byrd played fullback and defensive end for us and he was one of the most versatile players we ever had around here. Brandon is like that. We havent had many kids as versatile as those two guys.

Carson went even further and paid Perkins the ultimate compliment a coach can pay a player.
When we do our All-Eisenhower team, Brandon Perkins will be on that team, Carson said. Hes a rare athlete and I only wish we had him back for another year or two. Hes a good kid. He does everything you ask of him on and off the field. Hes a true leader.