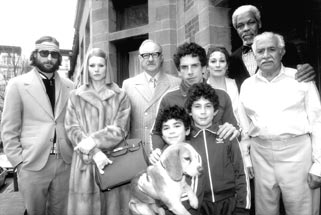 Quirky, to say the least, and a little uneven yet ultimately satisfying, The Royal Tenenbaums is wild and wacky fun.

It is the time of year for movies with something extra. Movies with heart and originality and movies with great acting are in the forefront in December and January in preparation for Golden Globe and Oscar contention.

The last two movies reviewed on these pages (Beautiful Mind, In the Bedroom) are in the running for Golden Globes for best drama of the year. The program airs Sunday the 20th  after this goes to press, but before its delivered.

Gene Hackman who plays the title character, Royal Tenenbaum, with grace and tons of spunk is nominated for a Golden Globe in the leading actor in a comedy or musical category and may have a chance at an Oscar nod if Academy voters dont ignore comedies, as is usual.

The cast of Tenenbaums is huge and all are worthy of praise, but it is Hackman (whos been in just about every other movie this year) who has the best part. Royal is a terrible scoundrel, as self-centered as they come, but hes hard not to like with his naughty little boy ways and devilish smile.

Hes done a fine job of messing up his family. Not that they havent helped him with their pouty, neurotic ways. Two sons and an adopted daughter were all well on their way to rich and rewarding lives early on. As adults, they are miserable with failure and fear.

Ben Stiller (Zoolander, Reality Bites) plays Chas, who as a child was a financial wizard. He made loads breeding Dalmatian mice. Imagine that. Now hes an angry and obsessively overprotective father of two boys who look just like him. Stiller is restrained, but does shine as he shows total disdain for Royal.

Luke Wilson (Legally Blond) plays former tennis champ Richie Tenenbaum. He had a meltdown at Center Court when his unrequited love for Margot became too much to handle.

Gwyneth Paltrow (Shallow Hal, Shakespeare In Love) is Margot, Richies adopted sister who was an award-winning playwright, but has not been able to grow up in any way since. Needless to say, there are problems with their relationship.

Royal does not think the relationship is a good idea because society would not approve. He says this with the authority of a man who has been told all too many times before what is appropriate and what is not. Of course, hes never followed this advice.

All the children, especially Richie, have a real melancholy about them. Richie is so depressed he takes drastic action. As funny as Tenenbaums is, it is also poignant and even downright sad at times. But thats life, isnt?

Not to be forgotten is the wonderful Anjelica Huston (Ever After, Addams Family Values) as Etheline Tenenbaum. She knows her children need help so she lets them all move back into their big house, which is so interesting its as if the structure is a part of the eclectic cast.

Huston needs to work more; she is such a joy to watch. She and Hackman make a great couple; they are both intelligent and feisty.

Lukes brother and director Wes Andersons (the very funny Rushmore) writing partner Owen Wilson (Behind Enemy Lines) plays a Tenenbaum wannabe. He also has a thing for Margot. She spends the least amount of time with her husband, Bill Murray.
Murray doesnt have the plum role here that he had in Rushmore, but he does have a few notable lines. Upon hearing about his wifes rather cryptic past it is not the plentiful and varied lovers she has that shocks him, it is her longtime tobacco habit that gets him. She smokes! he says.

If your taste runs toward quirky or you like Hackman or any of the others in the fine ensemble cast (which also includes Danny Glover and Seymour Cassel) see The Royal Tenenbaums.