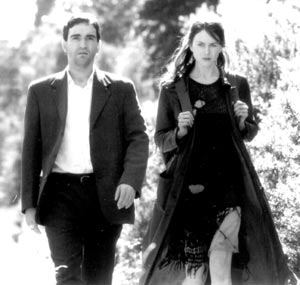 With Birthday Girl Nicole Kidman once again proves that shes much more than just a pretty face and the ex-wife of that super star, whose name need not be mentioned.

Thankfully Kidman is terrific as a Russian mail-order bride – actually, e-mail – who turns out to be a lot more than lonely British clerk Ben Chaplin bargains for because the movie, though mildly diverting, adds up to little.

A bit reminiscent of Alfred Hitchcock and noir films of the 40s and 50s, Birthday Girl doesnt even seem to be trying to add up to anything memorable.

For some movies thats a blessing, but Birthday Girl needs more plot, more thought, more something. What, I cant quite pinpoint, but I do know in the end I was dissatisfied and disappointed.

In writing this review three days after viewing the movie, Im having great trouble remembering the film or even caring.

What is memorable is how Kidman (Moulin Rouge, The Others) sets up Chaplin (The Truth About Cats and Dogs) with sex.

Few would argue with the adage that sex sells. Well, it, along with Kidmans acting, is what will draw people to the movie and is what they will talk about.

Kidman is Nadia the beautiful, chain-smoking bride Chaplins John orders thinking hes getting a demure, English speaking mate. Well, you cant trust that Internet. She appears not to speak any English and though she knits, shes anything, but prim and proper.

This is when the movie changes, not for the better. Their rather kinky evolving relationship, with long stretches of no conversation, and Johns blossoming would have made a more interesting movie than the con game, crime drama/chase film that ensues after the cousins drop in on Nadias birthday.

Thats when the movie becomes fairly predictable and characters start to do things that will have you thinking to yourself Call the police now, you idiot.

Chaplin is a fine understated actor, but hes a little too mousy all the way to the unbelievable end. He does have some good lines, especially after he gets mad at Nadia.

French actors Vincent Cassel (Brotherhood of the Wolves) and Mathieu Kassovitz (Amelie) make the most of their roles Nadias Russian relatives.

Kidman is a brave actress, taking different types of roles with unproven or avant-garde directors.
She scores here, even if the movie doesnt. Rated-R for sexual content, language and some violence