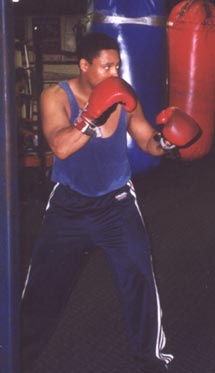 In late 1999, The Northeast News brought you the story of Maurice Daugherty, a 1977 Aldine High School graduate who was returning to the professional boxing scene at the age of 41, after a 10 year hiatus.

Well, hes back again. Then and now, his dream is to be the light-heavyweight champ. There have been slowdowns and setbacks on the way to his goal, but Daughertys attitude is as positive as ever as he prepares for his first fight in a year following major surgery on his shoulder.

Ive always been confident, says the affable Daugherty whose face has the lines a 43-year-old, but whose build looks 10 years younger. He repeatedly credits a strong faith in God as one of the reasons hes so positive.

Daugherty will need that confidence, and then some, when he goes against a man simply called Buffalo at the Radisson Hotel on the Gulf Freeway next Tuesday, the 12th. The George Foreman All-Star Boxing Gala III will consist of four fights, one of which will feature a protegee of Foremans.

Buffalo, with a 4-0,1 record, is from Rusk, Texas. The 34-year-olds real name is Everett Gill. Buffalo may be younger and stronger, but neither Daugherty nor his promoter Andrew Hex are worried.
Odds are against Maurice, says Hex. Hes an underdog in size, age and weight, but hes faster.
So fast, hes changed his name. Previously known as the Brown Bomber, Daugherty is now called the Stealth Bomber because you dont see him coming, says Hex.

Daughertys father was doing yoga one day in early 2000 when it came to him that his son should go from the Brown Bomber to the Stealth Bomber.
Its not his name Daugherty is concentrating on these days. The 5-foot-10-inch Daugherty is training and beefing up to his goal weight of 189 for the cruiserweight fight on the Feb. 12.

If all goes well, approximately nine more good fights are needed before he actually has a shot at the light-heavyweight champ. Roy Jones, Jr. currently holds that title.

If the fight does not go well, this round in Daughertys boxing career may be over.

I have not reached my prime, Daugherty says with confidence between workouts at Mains Boxing Gym downtown where he trains every weeknight. He runs up to five miles a day on the weekends and a couple times during the week.

Boxing has been a part of Daughertys life off and on since he was 15.

Muhammad Ali was my inspiration, he says as if that were a given. Who else but the Greatest would inspire a young man? Martial arts movie star Bruce Lee has also had an impact on Daugherty.

Since 1974 Ive been a follower of Bruce Lees style, Daugherty says as he explains that he incorporates the Jeet Kune Do method of martial arts in his training. It helps his speed.

The fight Daugherty had at 15 went so well that the experience was enough to hold him over for years.

I got a taste, he says. I did good. I know it sounds funny, but I had my trophy so I was fine with it. I could then concentrate on my studies, but I always knew Id go back [to boxing].

He did not fight again until he was 22. His amateur record is 5-5, not great he knows, but he was fighting with a debilitating shoulder problem the whole time.

I was fighting out of passion, he says.
That passion was strong enough to win Daugherty the Houston Novice Golden Gloves in 1981 and he was runner up in the 1983 and 1984 Silver Gloves.

A pro fight was set up just days away and though he was not prepared, he went ahead and boxed. He was knocked out.

Daugherty did not fight again until 1989. That fight was going well until he dislocated his bad shoulder.

Again, he always knew boxing would call him back someday. It took ten years before he regained the passion to return to the ring.

He has a 3-2 record since getting back to boxing in November of 1999. His last fight was Jan 9, 2001. It did not go well. The horrible fight as Daugherty terms it, made him realize that hed have to have his rotor cuff fixed if he were to pursue the light heavyweight title.

The more than five-inch scar from the surgery is hard to miss on his massive left shoulder.
His arm feels good and hes on the path to the title says the dream oriented Daugherty.

Dont let anything discourage you from your dreams, he says. It is tragic when people are discouraged.

In conversation, he continues to return to the topics of staying positive, believing in yourself, God and his new church, Freedom Fellowship, in Porter. He talks about his manager Allan Litvak, his trainer Pops and his pastor Debbie Dunn.

The assured, upbeat Daugherty is the musical minister at the church. He points out with a slight chuckle that hes the only African American member.
Daugherty does know how to do more than box. A piano player since he was five, hes played professionally at events and restaurants for years, hes was a crane operator in the early 80s and currently works in management for Alamo Car Rental.