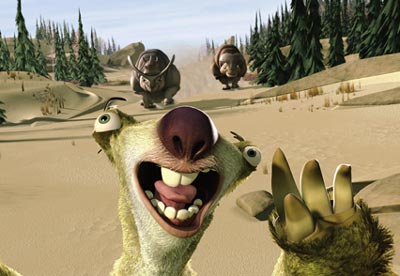 Animation has been used in films since the 1890s when movies were first invented. Since then the technique has been used extensively, usually with great success, though it has not always received the respect it deserves.

It was only in 2001 that a category was added to the Academy Awards to honor the best-animated movie of the year. Well find out which one wins on March 24th. Id bet money that Shrek will take home the little gold bald guy.

Im just as sure that next year the very amusing Ice Age will be in the running for an Oscar.

Not as satirically smart or as richly textured as Shrek, Ice Age is similar to that movie in plot, character traits and some of its messages.

Ice Age, like Shrek, is a satisfying mix of sly witticisms and buddy banter along with some potty humor thrown in for the kiddies.

Not surprisingly, the action takes place thousands of years ago when the world was being covered with ice.

Ray Romano (Everybody Loves Raymond) provides the voice of our hero Monty, a cranky woolly mammoth who just wants to be left alone as he treks in the opposite direction of most of the other animals who are looking for warmer climates.

Monty meets up with Sid, a sloth who has been left behind the migration partially because hes lazy, but mainly because he can be quite irritating. As everybody knows, irritating is a great trait in a comedy.

John Leguizamo (Moulin Rouge) provides the voice of Sid. Boy does he get to use his vocal cords because as with the Donkey in Shrek Sid never seems to shut up. And he has no problem hero worshipping a creature who does not like him.

Monty is a loner and wants nothing to do with the silly sloth. Not surprisingly, before long Monty is saddled not just with Sid, but with a human baby and an untrustworthy saber-toothed tiger Diego, voiced by Denis Leary (The Ref, TVs The Job).

As in Shrek theres a quest that has them travelling far and encountering dangers. Unlike Shrek, theres no romance in Ice Age. In fact, there are very few females at all. I dont know if the baby is female or not. If so, it hardly counts.
Two female sloths have a memorable sequence lamenting how hard it is to find a good male, The sensitive ones get eaten.

There are numerous references to survival of the fittest and the harshness of nature. A pride of saber-toothed tigers are especially tough  going beyond hunting for food to revenge on humans. The lead tiger is pretty scary and his thirst for the babys blood could frighten some kids.

Ice Age has edge. It even has moments when its a little mean spirited, but ultimately its about being good to each other  no matter the species.
The group ends up becoming an unlikely herd, in other words a non-traditional family  a loving, trusting family.

Monty may be the hero, but its Scrat, an ugly squirrel like creature that gets things started by breaking off a huge glacier while trying to bury an acorn. Scrat is a hoot from the moment he opens the movie to his various small scenes during the film and his continued acorn obsession at the end of Ice Age.

As with many animated films during the last few years, Ice Age is not just for kids. Theres something for everyone. Rated-PG Mild peril