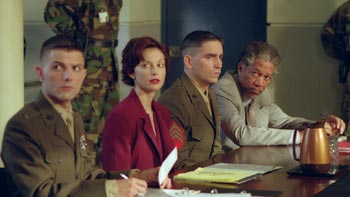 You may get a sense of déjà vu while watching High Crimes, the new Ashley Judd, Morgan Freeman thriller.

Yes, you have seen Judd and Freeman fighting bad guys together before if youve seen Kiss the Girls. And yes youve seen the spunky Judd getting tough if youve seen Double Jeopardy or Eye of the Beholder or the previously mentioned Girls.
Besides the leads in High Crimes there are many aspects of the movie that will seem similar to anyone who watches movies on even a semi-regular basis.

The 15-year-old who sat next to me found High Crimes rather boring because youve seen it all before.

Hes right about the seeing it all before, but I would be more apt to call it disappointing than boring.

High Crimes does have some entertainment value, mainly because of the very good Freeman and Judd. A bit of originality would have made it memorable instead of just another serviceable thriller that will leave your mind faster than the popcorn kernels get unstuck from your teeth.

There are a few surprises in Crimes, but the movie does not always play fair with them. Of course, most people dont go to this type of movie expecting logic, which is a good thing in the case of Crimes.

Judd plays a smart defense attorney in San Francisco with a perfect home and a perfect husband  or so she thinks. Jim Caviezel (The Thin Red Line, The Count of Monte Cristo) is her sweet, supportive, caring hubby.

A lovely day shopping turns into a nightmare after the FBI swoops in and captures Caviezel charging him with desertion from the Marine Corp, murder and a few other things.

Faster then you can say A Few Good Men hes on trial in a military court with a green young lieutenant, his wife and a former Marine lawyer, Freeman (Along Came A Spider), defending him.

Judd wants to believe her husband, who seems so devoted to her and cries so convincingly, but shes also feels betrayed by his years of leading a false life. I felt for her when his admission that hes not the man she thought he was leaves her speechless, but thats as emotional as the movie gets.

She stands by her man and with Freemans help goes about defending her husband even though nasty and mysterious things happen. Cryptic messages delivered by a man at the grocery store and a man with a gun and oil thrown on her car are just a few of the events that transpire.

Freeman and Judds characters obtain evidence illegally and are then shocked when the judge does not admit it. Please. I thought they were smart, but they keep digging.

The digging for information on a cover-up takes them all the way to the top of the Marine Corp. The back-story of what went on in El Salvador in the 80s is the most realistic part of the film.

The ending is supposed to be a shocker, but I cant imagine anybody really being surprised. The most interesting scene in the last few minutes has Judd meeting Freeman in a building that looks a lot like a building from Alfred Hitchcocks Vertigo, which was also set in San Francisco.

Go ahead a call me a big movie geek for even noticing. Oh well, it did give me pleasant thoughts of Vertigo.

Now theres a movie with suspense and surprises, and its quite memorable to boot, unlike the just so-so High Crimes.