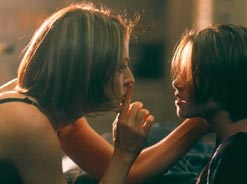 Like the characters in the Panic Room, you too might experience fear and alarm as you watch this taut thriller.

There is a definite Alfred Hitchcock quality to director David Finchers (Seven, Fight Club) Panic Room. There are normal people put in extreme circumstances, theres spooky music and the main action involves just a few characters. As with most Hitchcock movies, Panic Room is engrossing, well acted and edge-of-your-seat-scary.

Also like Hitchcock, Fincher uses some interesting camera work to intensify action or just to show a scene in a unique way.

As with one of Hitchcocks best movies Rear window most of the action takes place in a confined space. Other than the opening and ending scenes, everything happens in the home of Meg Altman and her young daughter Sarah.

Its their first night in the big city house, which is outfitted with an elevator, four floors and most important to the plot  a panic room. This safe room has thick walls, a steel door, security monitors, its own telephone line and ventilation system.

Jodi Foster (Silence of the Lambs, Anna and the King) plays the fragile acting and looking Meg, who is still reeling from a messy and public divorce. She does not want the new house and the panic room does not impress her.

She thinks its a silly extravagance and a possible danger  a clue to future developments  until three men invade her home in the middle of the night.

Then the panic room is safe haven, until she figures out that the reason the men are there is to get whats in the room.

The leader, Jared Leto (Requiem for a Dream) is the greedy spoiled relative of the former owner. To help get what he wants, hes enlisted Forest Whitaker (The Crying Game, Phenomenon) a builder of safe rooms. Rounding out the trio is Dwight Yoakam (Sling Blade) as the mysterious masked man that Leto has signed up at the last minute.

They are an odd bickering bunch, Letos character is not too bright, Whitaker is basically a good bad guy and Yoakam is a really evil bad guy.

The question is, are they a match for a mother protecting her young? What do you think? To make it more interesting, or some might say predictable, Sarah has a serious ailment that needs attention.

Part of the fun in watching Panic Room is putting yourself in Megs place. Would you be cool enough and smart enough to win against these three criminals?

The small cast is excellent all the way around, especially Foster who displays hurt, fear and determination so well, often just with her expressive face.

As entertaining as Panic Room is, there are some scenes that will have you saying Oh please. Now do you really think phone lines within a wall are labeled with tags that have phone line on them? I dont think so.

A beating scene went on too long and was excessively violent, but this is a David Fincher film a very good film at that. Rated-R for violence and language