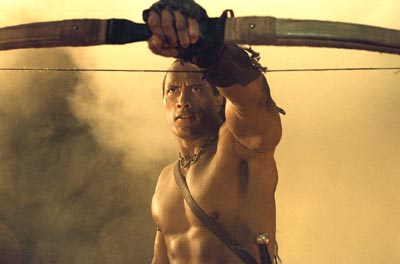 The Scorpion King steals blatantly from The Indiana Jones movies, which of course stole from the old adventure serials from the 30s and 40s.

Those serials, aimed mainly at kids, were not that good. The Indiana Jones movies were aimed at everyone and had high production standards and loads of talent in front of the camera and behind the scenes.

The success of the Indiana Jones films had Hollywood making numerous knock-offs of the genre. The Mummy, and to a lesser extent The Mummy Returns, were two of the better ones.

Now, from the last Mummy movie comes The Scorpion King, not a sequel, rather an exploitation of one of that movies key minor character played by wrestling sensation The Rock.

With The Scorpion King the modern age of adventure serials has returned to its origins: the likable hero saves the day in an implausible way with lots of cartoon style violence and little blood and even less plot, but no shortage of stock characters.

As in days of yore, the movie is aimed at kids  or fans of The Rock who are mostly young  and while it might be a fun diversion, its not a very good movie. But its not bad either, especially if expectations are not high.

The Rock (real name Dwayne Johnson) made his big screen debut in The Mummy Returns as The Scorpion King. Here we find out how he became king.

There is the standard plot of good winning over evil and the good guy getting the girl, but its really all about The Rock. The Rock fights hard and kicks butt. The Rock makes funny little quips when not looking stoic. The Rock fights some more and shows off his muscles. The Rock woos a lovely young woman while kicking even more butt. You get the pattern.

There is an awfully lot of fighting, but it is relatively bloodless though there are lots of explicit sounds of swords going into flesh. Unlike the Mummy movies, spectacular special effects are not part of every scene. The production values on The Scorpion King are strictly in the medium budget range. There are some returns from the previous movies, but other than The Rock, none are on screen.

There is not nearly as much dialogue as there is fighting or posing by The Rock, which is fine since there are already too many lines like Mathayuss (The Rock) creed: Live freeÖ Die Well. Then theres the gem that lets us know that the sorceress who helps the bad guy Memnon (Steven Brand) is really a good woman at heart, Rivers of blood will never buy peace.

Grant Heslov (True Lies, Enemy of the State) adds comic relief as a horse thief who becomes Mathayuss sidekick. Not that the movie needs much comic relief since it does not take itself too seriously. Thank goodness.

Real bad guys are important in this type of movie; alas Memnon does not seem so menacing. The Rock is much fiercer looking and he has tons more muscles.

It appears The Rock is hoping to step into the shoes of fellow muscleman Arnold Schwarzenegger. They both have lots of charisma; their acting skills are about the same, though The Rock does have a better speaking voice. Rated-PG-13