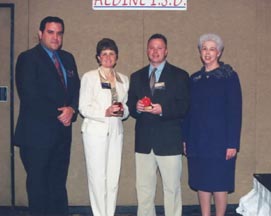 Hall and Jackson were two of the six finalists for the award from a field of 58 campus teachers of the year. The four other finalists were Connie Reimer-Cobb of Orange Grove Elementary, Linda A. Toner of Wilson Intermediate, H.P. Hyder III of Drew Academy and Dorita Edwards of Shotwell Middle School.

Hall is a fifth-grade math teacher at Bethune Academy, while Jackson is a physical education/wellness instructor and the head varsity girls basketball coach at Nimitz High School.

Aldine ISD Superintendent Nadine Kujawa congratulated and thanked Hall and Jackson, along with the 56 other campus teachers of the year, for devoting their lives to teaching young people.

The ability to teach is a gift, she said. We are so glad you have chosen to teach our children. You share your gift with the children in Aldine on a daily basis. You do make a difference.

Kujawa also thanked the districts business partners who donated gifts and prizes to the winners, the finalists and the 52 other campus teachers of the year.

We want to thank our business partners for their generosity in honoring our teachers. You (business partners) are so much a part of our community and we appreciate you so much, she said.

The 52 campus Teachers of the Year received a candle assortment from the Mall. Saltgrass Steakhouse on I-45 provided Hall and Jackson with $100 gift certificates, dinner for two gift certificates for the four finalists and 58 coupons for appetizers for all of the campus Teachers of the Year. The Greenspoint Club presented Hall and Jackson with a free 30-day membership and awarded the four finalists a 30-minute massage.

Intercontinental Hotel, a deluxe room on Friday or Saturday night at the Wyndham Greenspoint Hotel, and a gift certificate for dinner for two at the Baytree Bistro at the Wyndham.

Linda Scott, program director of elementary science and cooperative learning, served as chairperson of the Teacher of the Year Selection Committee. She was joined on the committee by Peggy Hebert, Ron Venable, Mary Richardson, Bobby Heathcock, Jan Seleck, Kathy Cramer and Carrie Durley.