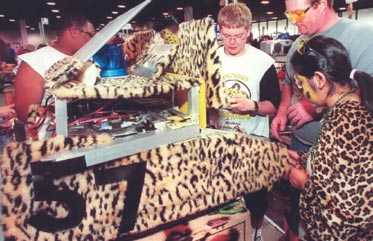 FIRST Robotics teams at the Lone Star Regional Competition at Reliant Arena were recently seeing spots as the Leopards from the High School for the Engineering Professions prepared for battle (L to R) Walter Wyre, Chris Prince, ExxonMobile mentor Cris McGuffie and Samara Olvera work on the robot in the teams pit. ExxonMobil sponsored the team which placed fourth in regional competition.

An arena filled with loud music and screaming high school students, some of whom run around with painted faces and faux leopard suits, can only be a pep rally or a sporting event, right? Wrong.

In a spectacle of unparalleled ingenuity, students from all over the United States packed up their robotic creations and battled it out recently at the FIRST Lone Star Regional Robotics competition held at Reliant Arena in March.

For Inspiration of Recognition of Science and Technology (FIRST), which inventor Dean Kamen created in 1989, aims to create enthusiasm about science and engineering. And what better way to do it than by creating challenging, excitement-filled competitions that rival any basketball game.

In what is a unique combination of shop class, calculus, science and electronics, high school students who participate in FIRST get six weeks to transform three boxes full of motors, electronic boards and software into a 125-pound, sophisticated robot that performs a range of complicated tasks. But they cant do it alone.

Companies like ExxonMobil provide support on many levels. ExxonMobil, for example, sends its employee mentors to team up with local high school teams like Booker T. Washingtons magnet school, the High School for the Engineering Professions (HSEP). In addition to guiding them through calculus equations and structural engineering feats during the six weeks of preparation, the mentors often attend the competitions, where they act as cheerleaders from the sidelines and technological problem solvers in the pit.

For ExxonMobils Brian Kuzma, a FIRST mentor with HSEPs team and structural engineer who designs offshore platforms and subsea equipment, his professional background and expertise come in handy when dealing with structural questions that come up during the weeks of preparation.

This can be a pretty intense game, in terms of robot-to-robot contact, said Kuzma. My structural engineering background is especially beneficial to the team because I can use it to visually show them how certain metals will abide by certain properties. Its easier for them to understand, because they can see the greater strength or heavier weight of certain metals compared to others. From there they can decide which type of metal to use.

ExxonMobils partnership with HSEPs team, or the Leopards as they prefer to be known, dates back to when the team formed in 1998. And theyve had a successful run. At the recent Lone Star Regionals at Reliant Arena, the team took fourth out of 45 teams and is on their way to nationals toward building the robot, entry fees and travel for the Leopards regional competitions. ExxonMobil has also sponsored the regional competition for the last three years, giving $25,000 each year.

Supporting HSEP and the FIRST Lone Star Regionals Robotics competition is just one of the many ways ExxonMobil is involved with community service. The ExxonMobil family has a long history of supporting community groups and educational organizations in the greater Houston area, not only with contributions and grants to targeted organizations, but with thousands of employees and retirees who volunteer their time and talent to local non-profits.