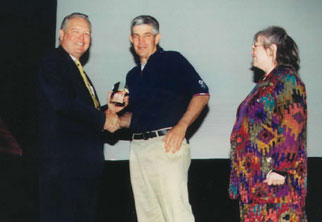 Over the years, Jim Mattress Mac McIngvale has generously given of his money and time to the Aldine community and that community said thank you in a big way on Wednesday, May 15 when the Aldine Scholarship Foundation (ASF) held a luncheon in his honor and presented him with the second annual Community Star Award.

The luncheon was held at the M.O. Campbell Educational Center and was attended by more than 250 friends and associates of McIngvales.

And even as he was being honored, McIngvale once again stepped up to the plate and made a $20,000 donation to ASF, which provides scholarships to North Harris College to graduates of Aldine ISD.

ASF is a wonderful organization, McIngvale said. What its all about is helping young people and thats why Im making a $20,000 donation to it.

Prior to receiving the Community Star Award, McIngvale was roasted and toasted by Oliver Luck, chairman of the Harris County Sports Authority, his brother Ralph McIngvale, who is president of Southern State Offshore Inc., and Donaldson.
All three shared humorous stories about McIngvale, and all three heaped praise on McIngvale for the many positive things he has done for Aldine and Houston.

Hes a very generous fellow, Luck said. He sticks to his focus and hes very positive. Hes brought a lot of positive recognition to the city.

His younger brother Ralph provided insight from a family perspective and said he was fortunate to have him as a brother.

My brother is a tremendously generous guy, Hes done a lot for the city of Houston. My family is very proud of Mac, Ralph said, choking back tears.
Donaldson praised McIngvale for his support of Aldine ISDs FFA Project Show and the numerous times he has spoken to AISD students about the dangers of drugs.

Ive known Jim for 22 years, and anytime we called him, he came out to talk to our kids and he still does that today. Not one time did he refuse to come out.

Hes made a lasting impression on our kids, Donaldson said. He never settles for second best. Its an honor to know a man like Jim who is generous and compassionate.