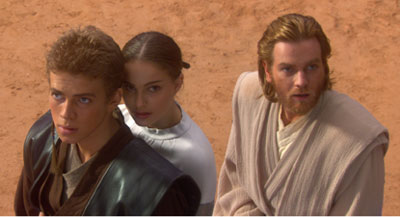 Hayden Christensen is Anakin Skywalker, Natalie Portman is Padmé and Ewan McGregor is back as Obi-Wan Kenobi in Star Wars: Episode II, Attack of the Clones.

With some reviews its hard to know where to start – this is the case with the latest installment in the Star Wars saga Episode II, Attack of the Clones.

Theres so much that can be said about this movie alone, plus its hard to write about the latest without mentioning the first 1977 Star Wars and those that followed. Most of you know the original was actually the fourth episode in the series that will probably end at six. Its all rather confusing. The last three were made first in the 70s and early 80s while Episode I came out in 1999, now theres Episode II and Episode III is scheduled to be released in 2005.

First off, Clones is better than the last movie, Star Wars: Episode I, The Phantom Menace. It harks back to the tone and spirit of the original three movies, especially the best of those The Empire Strikes Back, but it does not reach that superior films level of sophistication or satisfaction.

Empire was a perfect blend of suspense, action, romance and character development. Clones is nowhere near as evenly paced. It even gets boring at times. At others, it hammers you over the head with gee-whiz effects and relentless motion.

Theres no denying that the movie looks gorgeous and the effects are wonderful, but it almost looks too good. Just because you can create something visually on a computer doesnt mean that you should. I rather long for painted sets, puppets and miniatures. Theres a lack of honesty in tangibles created by computer that do not exist in the real world.

It all seemed more honest back in the original three. A sense of truth and honesty is important when actors are spouting corny lines about the force and the dark side. Or maybe its that I have grown more cynical since I saw the fourth, fifth and sixth episodes.

Ten years have passed for Anakin Skywalker and company. He is now 19 and showing more skill as a Jedi as well as exhibiting some of the traits that will enable him to turn to the dreaded dark side. Hayden Christensen (Life as a House) is Anakin, the future Darth Vader. Hes rather wooden in the role.

Anakin is handsome and mostly likable, but hes also sulky, angry and more childish now than he was 10 years ago. Hes rebelling against his trainer Obi-Wan Kenobi, who is once again played by Ewan McGregor (Moulin Rouge).

Obi-Wan gets one of the best lines in the movie when he refers to his exasperation with his young pupil, but its good ol Yoda who steals the show. The little green guy proves why hes such a revered master Jedi. Its not because of his backward way of speaking.

As was mentioned before, theres many other things I could write about, but it is necessary that I write about the plot, though Id rather not. Actually, by the time this review is printed just about every fan of the series will have seen the movie – at least once.

A quick overview: As with Menace theres a lot of boring politics and the former Queen Padmé Amidala of Naboo is smack in the middle of it, this time as a senator. Obi-Wan and his student Anakin are given the job of protecting the senator from an assassin. Anakin is very happy about this since hes been thinking about Padmé since they first met 10 years ago.

We all know they are the future parents of Luke and Leia so its no surprise that they get together. There are obstacles but most of us already know how it all ends. The big question of how Anakin turns evil is not revealed yet, but we do see he has a dark, vengeful side, especially when his mother is taken away.

It turns out hes a mamas boy and everyone knows you dont mess with someones mother.

While Anakin and Padmé eye each other all lovey-dovey, Obi-Wan is chasing down the man responsible for the attacks on Padmé. It turns out to be Jango Fett who is none other than the father of Boba Fett, the bounty hunter after Han Solo in Empire. Obi-Wan also discovers that a large army of clones is being built.

Theres a big showdown and as the title promises there is an attack by clones  lots and lots of clones.

To reassure all those Jar Jar Binks haters – there are many of you – hes only in this movie for a few blessedly short minutes. All the other major characters that were alive at the end of Menace return. The ever so cool Samuel L. Jackson gets more screen time as Mace Windu. Plus, he has a purple light saber and knows how to use it.

For fans of the saga, Clones will whet your appetite for more. Its every fans dream to watch all six movies together, but we must wait a few more years for episode three. Darn! Rated-PG