Accept the invitation to go to My Big Fat Greek Wedding 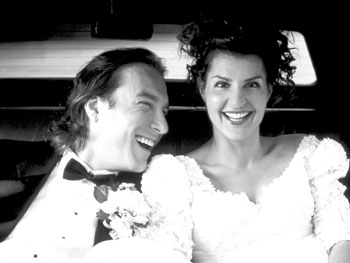 The story behind My Big Fat Greek Wedding is almost as charming and entertaining as the movie.

Nia Vardalos grew up in a large, loud extended Greek family in Canada. The actress-writer developed a one-woman play about her family, her life and her marriage to a non-Greek.

Actress Rita Wilson who is Greek (also known as Mrs. Tom Hanks) went to the play with her mother. They loved it so much Wilson sent her husband, who then told Vardalos that his production company wanted to make her play into a movie.

Vardalos said great, because she had already written a screenplay, but she wanted to star as Toula Portokalos. She got her wish and the result is a very funny, sweet romantic movie.

We learn that Toula has constantly been reminded that she is Greek and as she says, Nice Greek girls are expected to do three things: Marry Greek boys, make Greek babies and feed everyone until the day we die.

Horrors, she is 30 and not yet married. Shes way past her expiration date. This disturbs her father and others in the family to no end, though mom is pretty sympathetic. Toula is not that concerned with marriage, its her job in her parents restaurant that has her troubled. She wants to do something else and decides changes must be made, not only in how she looks, but what she does.

Your familiar with the plot, ugly duckling becomes the swan and gets the man of her dreams. Unfortunately, the man of her dreams is not that of her fathers so theres conflict, and compromises must be made. Fortunately, for the audience all of this is done in an amusing light tone with a fairytale type air about it and lots of heart.

The movie is highly autobiographical; Vardalos just expands and exaggerates her life. Some might find the characters stereotypical, but there is a definite ring of truth about most of them.

She is a little harsh in her depiction of the parents of her husband to be: Boring, dry stiff middle class white people. Not that they dont deserve to be made fun of, but its so easy to do and has been done in very similar ways before.

Anyone remember Fools Rush In from a few years ago? There the cultural clash was between Hispanics and the boring, white middle class. Other movies have had similar themes. Dont get me wrong, My Big Fat Greek Wedding is the best of the bunch I can remember, but I was still disappointed when they reached for laughs from such a familiar bag of stereotypes and clichés.

The very cute John Corbett (Sex in the City, Serendipity) plays her love, Ian. This guy is the sweetest man in the world so its just a little hard to believe that some other nice girl had not snapped him up faster than a 75-percent off leather coat.

You might not know the names, but you will probably recognize many faces in the cast. Andrea Martin from SCTV (Vardalos was a Second City member) plays Aunt Voula. Veteran movie and TV actor Michael Constantine plays Toulas loving but overly protective chauvinist dad.

N Sync fans will want to catch Joey Fatone as one of Toulas many cousins According to the press notes, Fatone says big fat Greek weddings are very similar to big fat Italian weddings.

Even if youre not from an ethnic group, I bet you will find something familiar and something agreeable in the entertaining My Big Fat Greek Wedding.