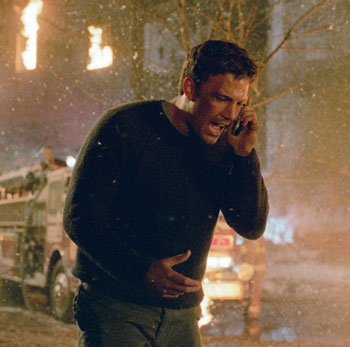 Unfortunately, this is not a review of what I believe is a very good movie, Sum of All Fears. Instead, its half review and half what can go wrong while watching a movie.

I showed up at two screenings of the latest movie made from a Tom Clancy novel, but never did get to see the whole movie, but what I did see was sensational.

In the scheme of things, reviewing movies is not the most stressful of jobs. Sure you have to work on a deadline, computers can be cranky and often the words dont tumble from the addled brain as easily as one wishes, but thats the life. Writers know this and deal with it.

Nine years ago when I started writing reviews I didnt have a clue about the various things that can go wrong while seeing a movie.

It was quickly evident that I was going to spend a lot more time at movie theaters, not just because I was going to see a lot more movies, but because the free advanced screenings reviewers are invited to are usually promotional events for radio stations or newspapers. This means the theater is over-booked and if you want a seat, you had better show up early.

Often, most of the seats are full an hour before the movie is to begin. One of the perks reviewers receive occasionally (other than free tickets) is a roped-off section reserved for the critics. In those cases, you might get away with showing up only a half-hour early.

Also, none of these screenings take place on the north side of Houston so another 30 minutes to an hour is usually needed to get to the theater, depending on the traffic. We all know how Houston traffic is in the evenings.

An invaluable tool for a reviewer is the press kit put out by the studio. It has a synopsis – I never read this part before the movie – a full list of credits and background of the filmmakers and cast. Pictures to put in the paper are also included in the press kits, which usually show up before you start writing – usually.

A ticket, or pass as its usually called, arriving after the movie has already screened is not common, but it happens.

But what drives most reviewers crazy is when a film is shown improperly or not at all when it is scheduled.

Unfortunately, both of these things happened on a Thursday back in April when a morning press screening of Sum of All Fears was scheduled. The print of the film had not yet arrived at the theater by 10 so the studios representative told us to come back at two that afternoon. The print not arriving for a screening has only happened a couple of times in the last nine years.

Ive been to movies that were delayed because the print arrived late and had not been set up. Short version: A movie is sent in a metal box on numerous reels, usually about five depending on how long the movie is – each reel is 20 minutes of film. The reels are then attached together end to end on a large round platform that turns as it feeds the film into the projector.

The problem with the Sum of All Fears was that a reel was numbered incorrectly so we ended up seeing one reel twice and another not at all. Im not sure how that happened. There are times when a reel is out of order, so you might see the end of the film where the middle should be and the middle at the end. One theater employee (who was really on the ball) once put a reel on upside down.

The worst part is that these mistakes are not easy to fix. Unwinding the movie, then fixing the problem and spooling the film back to where it should be can take as long as watching the movie, which is why I never did see all of Sum. There was another screening on another day, but I was unable to attend.

This is too bad because what I saw I really liked. Sum is as involving and as gripping as any movie released this year.

Since Ive not read the 1991 book the movie is based on, my big interest in the movie was seeing how well Ben Affleck filled the shoes of Harrison Ford and Alec Baldwin who both played Jack Ryan in the past, Ford in Patriots Games and Clear and Present Danger and Baldwin in the first Clancy book to be made into a movie, The Hunt For Red October.

Affleck is a fine actor, but he has a tendency to whine a bit, which he showed all to obviously in Pearl Harbor.

He is fine here, but hes no Ford and his chin seems a little weak for a character that saves the world on more than one occasion.

In Sum he saves the world with the help of Morgan Freeman – who is even more terrific than usual. Liev Schreiber as John Clark also helps, but none of them can stop a nuclear bomb from going off in Baltimore. This is one of the most powerful scenes Ive ever seen in a movie. The shots of the bomb going off and the aftermath made me feel scared and vulnerable. The scenes of devastation would have done the same before September 11, but now that we all know the mass destruction zealots can wreak havoc here, these scenes are especially effectual.
Even without seeing all of Sum I recommend it highly. From what I saw its the best of the Jack Ryan movies.