Some 50 members of the Aldine Serior High faculty, administration and staff received service awards for a combined 655 years of service to students in the Aldine community.

Librarian Doris Fox and English teacher Gerald Wesbrook, who retired at midyear, led the way with 35 years of service each. Assistant principal Jim Harrell, who retired at the end of the 2001-02 school year, received a pin for 30 years in the district.

END_OF_DOCUMENT_TOKEN_TO_BE_REPLACED

Houston prepares for National Night Out 2002

If youre looking for a way to make a difference in your community heres a suggestion: plan a National Night Out event in your neighborhood.

National Night Out is an annual crime prevention program that encourages citizens and police officers to meet and discuss strategies that keep communities safe.

The event takes place once a year on the first Tuesday during the month of August and is usually held in the evening hours around 6 p.m.

This year National Night Out will be observed on August 6, 2002 with a kick-off party planned for Friday, August 2, 2002 at Hermann Park at the Miller Outdoor Theatre from 10 a.m. to 1 p.m.

Many communities are actively involved in crime reduction programs all year long and National Night Out gives them the opportunity to show off their success and recruit more crime fighting eyes and ears to locate potential problems. Houston has won national recognition for participation in past National Night Out events.

Planning a National Night Out event is as easy as establishing a core group on your block or in your neighborhood. Plan small if this is your first time. Ask a few families on the block to participate and have them invite other neighbors. Decide what everyones duties will be like who will be in charge of getting balloons or providing drinks. Encourage local area grocery stores and businesses to participate.

Other ideas for a National Night Out activity include a pot luck dinner, parades, block parties, rallies, or have a neighbor pull their barbecue pit on the front lawn and grill a few burgers and hotdogs. Contact your local area law enforcement agency such as Houston Police, Harris County Sheriffs Department, Metro Police, HISD Police or the constable office in your area to get more details or call HPD Community Services Division at 713-308-3200. National Night Out information can also be obtained on the Internet at www.houstonpolicedepartment.com

END_OF_DOCUMENT_TOKEN_TO_BE_REPLACED 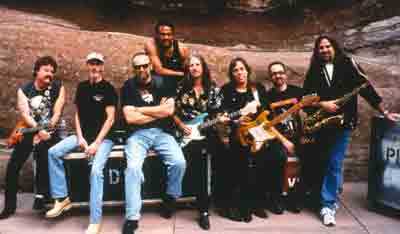 Over 100,000 spectators are expected to attend BP Power of Freedom, the most popular July 4th celebration in the greater Houston area. Scheduled for Thursday July 4 from 4:00 p.m. to 10:00 p.m., the popular patriotic event will be held at Eleanor Tinsley Park at Buffalo Bayou and televised live on ABC-13/KTRK-TV.

The Grammy award-winning Doobie Brothers, one of Americas best known 70s rock and roll bands, with well known hits including Takin it to the Streets, Jesus is Just Alright With Me, Black Water, Long Train Runnin and China Grove, will perform in a live concert.

Four stages will feature the diverse musical sounds of America, including country, Latino, jazz, rock, rhythm & blues and oldies. Skydivers and plane flyovers will entertain crowds from the Sky Stage.

At Liberty Park, people can experience Symbols of Freedom, displays of military artifacts and vehicles including tanks, huey helicopters, an authentic Firebase Camp, voting booth demonstrations and the Holocaust museum.

Children will stay entertained with inflatables and rides and games, while adults enjoy browsing the Freedom market.

Admission for the festival is $5 for adults, $2 for 12 and under and children under 3 can get in for free. Food, beverage and game coupons will be sold for $5 for 9 coupons.

For more information, visit the event website www.festival of Houston.com

END_OF_DOCUMENT_TOKEN_TO_BE_REPLACED

The Board of Directors of the Aldine Community Improvement District met in its regular monthly session at 7:00 p.m. on June 18 at Jeds ACE Home Center, 5415 Aldine Mail Route.

There was some confusion concerning the meeting place and several directors and interested residents went to the Aldine Y.O.U.T.H. Community Center at 4100 Aldine Mail.

At the May meeting Chairman Bailey expressed concern that the ACE location was not in compliance with the American Disabilities Act. David Hawes, Aldine CID Executive Director agreed to find an acceptable facility; he selected the Aldine Y.O.U.T.H. Center and the change was announced in this publication.

Later he was informed by Aldine CID attorney, Tim Austin, that the Board needed to vote on a resolution to move the meeting place before it could be done.

In the resolution passed Tuesday, the directors named not one but six acceptable meeting places including the Aldine Y.O.U.T.H. Community Center, the High Meadows Library, the James Driver Community Center, the Sheriffs Department Storefront, Mr. Austins office and the office of district managers, Hawes, Hill & Associates.

In other business, the Board received a report from the committee appointed at the May meeting to develop a district clean-up plan. The committee discussed a number of ideas including the recruitment of neighborhood volunteers, schools and youth groups to take part in a litter removal project, a hazardous waste materials collection day and a bandit sign removal project.

The District staff informed the committee that Aldine CID could not, at this time, sponsor any such projects because District managers (Hawes, Hill & Assoc.) had not yet obtained general liability insurance for the District, the directors, or the officers.

The next meeting of the Clean-Up Committee will be on July 30 at 7:30 p.m. at the Aldine Y.O.U.T.H. Community Center.

Susan Hill, Associate Executive Director, reported that she had requested bids from two companies that insure government entities and non-profits and expected to receive their offers before the July meeting.

If the District is unable to obtain insurance from one of those firms or two others suggested by Board members, it will have to rely on a municipal pool that Executive Director Hawes referred to as insurance of last resort.

Additionally, the Board discussed an application made to the Harris County Community Development Agency in 1999 for a grant in the amount of $100,000 to facilitate self-help community development projects in the Aldine community.
The grant application was made in the name of ALI, the Aldine Leadership Initiative, which was to be under the direction of the Aldine Community Improvement District.

The application was approved, but never funded because the legislation creating Aldine CID was vetoed by the Governor that year.

Susan Hill suggested that the Board consider making a similar application when HCCDA begins accepting new applications in November.

Finally, the Board discussed plans for members to meet with directors from other similar districts to share ideas and benefit from their experience. The retreat would enhance directors understanding of the districts functions and capabilities, increase their knowledge about available resources and give them the opportunity to develop a mission statement and strategic plan outline for the remainder of 2002 and 2003.

The next meeting of Board of Directors will be at the Aldine Y.O.U.T.H. Community Center, 4100 Aldine Mail Route, at 7:00 p.m. on July 16th. The public is invited to attend, and public comments will be accepted at the beginning of the meeting.

END_OF_DOCUMENT_TOKEN_TO_BE_REPLACED 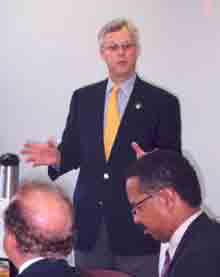 Dr. Bruce H. Leslie, Chancellor of the Houston Community College System met with local press representatives at a luncheon last Friday.
In his informal address, Dr. Leslie discussed the role of the college system in the community and its need to expand.

HCC works closely with the Houston Independent School District to prepare students to go on to a four year college or to enter the job world in a variety of careers that require specialized training.

Approximately 100,000 students pass through the system each year.

Dr. Leslie cited the need for the college to offer courses in growing fields such as environmental science, a move that will necessitate increased funding. He estimated that HCC will require an additional $6 million per year to meet the future needs of its students.

END_OF_DOCUMENT_TOKEN_TO_BE_REPLACED

West Nile Virus (WNV) has been identified in two dead blue jays found in northwest Harris County. WNV is a mosquito-borne disease that can cause encephalitis, a brain infection, This is the first recorded incident of WNV in Texas. Harris County Public Health Services Mosquito Control Division has and will continue to perform its active surveillance, trapping, ground spraying and community education programs in Harris County.
Mosquitoes acquire West Nile Virus from birds and pass it on to other birds, animals and people. It is not spread by person-to-person contact and there is no evidence that people can get the virus by handling infected animals. People can only become infected with WNV after being bitten by an infected mosquito. There is no evidence that people can get WNV from infected animals or people, or that people can transmit the VNV to other animals, birds or people.

People over 50 years of age have the highest risk of developing a severe illness because as we age, our bodies have a harder time fighting off disease. People with compromised immune systems are also at increased risk, however, anyone can get the virus,
Most people who are infected show no or only mild symptoms such as low grade fever and headache. More severe signs and symptoms can include: high fever, stiff neck, muscle weakness, disorientation, brain inflammation (encephalitis), coma and rarely, death. There is no specific treatment for WNV; however, in more severe cases, intensive supportive therapy is indicated. When symptoms of infection do occur, they usually appear 5-15 days from the time you were bitten. If you think you have been infected with the West Nile Virus, contact your family physician.

2.Make sure screens on windows and doors are in good condition.

3.Use mosquito repellent when outdoors. Be sure to use according to the label – less than 10% DEET for children.

6.Keep birdbaths clean. Change the water at least once a week.

8.To control mosquitoes inside a house, use a flying insect spray. Be sure to use according to directions on the label.