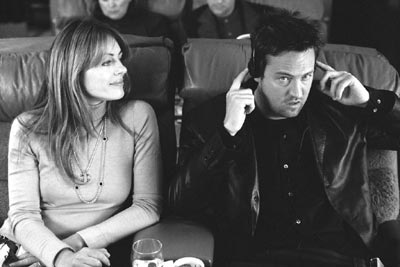 Elizabeth Hurley hooks up with Matthew Perry, a process server, to get back at her no-good husband in the comedy Serving Sara.

Friends star Matthew Perry is once again trying to imitate the success hes had as Chandler Bing in a major motion picture. Once again, the effort falls flat.

Hes not alone. His fellow cast members have not fared well on the big screen. Jennifer Aniston and Lisa Kudrow have had some critical success in movies if not big box office, but the rest have fallen flat in every way. Its hard to find writing in movies as funny as that on Friends.

Actually, some of the writing in Serving Sara is similar to what you might find on a comedy sketch show – silly pranks that last a few minutes and then fizzle out. That might be fine for Saturday Night Live, but it does not work for a 90-minute movie. Its sure not conducive to a smoothly moving plot or rich characterization. Instead, the movie relies on gross exaggerations and stereotypical cliches.

Serving Sara does a disservice to Texas, portraying us as a state full of cowboys with bad accents and worse fashion sense. Of course, exaggerations and stereotypes have long been used in comedy, but it really helps if you use them to say something and that you have more than just those ingredients.

Sadly, the movie has little more going for it. If youve seen the commercials, you have seen most of the funny stuff.

There are some funny early scenes of Perry carrying out his subpoena serving duties that do have a touch of originality. The movie should have concentrated on that aspect of the story instead of having Perry run around in circles or sticking his arm up a steers rear.

Perrys character, Joe, seems like a pretty smart and resourceful fella at the beginning of the movie, but gets stupider as the film progresses. Perry has had to do some silly stuff on Friends, but the results are usually much funnier. Another note: He looks better on the small screen.

Elizabeth Hurleys character, the titles Sara, supposedly helped her husband make some of his millions, but when it comes to catching him so Joe can serve him divorce papers before Joes rival can serve her, she is a complete ditz. And her acting is not much better. Hurley, a former model, was better in the Austin Powers movies. But much of the mess here is not the blame of the cast, which includes the always-interesting Cedric the Entertainer as Joes hyper boss.

This film has obviously had problems, which might explain why it is disjointed and uneven. According to the press notes production started in December of 2000. Sure, some movies may take more than a year to make, but thats because there are lots of special effects to add. Serving Sara has few effects, if any.

The movie has sat on the shelf for a while, which usually means its not very good or there is some sort of controversy about releasing the movie. There was no controversy regarding Serving Sara.
The filmmakers really should have taken out a lame joke about calling TV psychic Miss Cleo, who is so a year ago it was a clue that things were not quite right with the movie.

The filmmakers could have removed it without much trouble since they have tweaked the movie since the press kit was made.

The notes never say a thing about Hurleys Sara being the wife of the Texas millionaire, played by Bruce Campbell (Army of Darkness and TVs Xena: Warrior Princess). She is referred to only as his business partner.

This is strange because a big part of the illogical plot has her trying to serve him divorce papers first so the proceedings will take place in New York – her residence, which also makes no sense – instead of Texas. According to the movie, if the divorce takes place in Texas she will receive nothing because supposedly the laws here favor the man in a divorce. Actually, it is a community property state, which means things are split down the middle unless there is a pre-nuptial agreement.

Serving Sara is not an awful movie; its just a bad movie that thankfully has a few funny scenes. Rated-PG-13 for crude humor, sexual content and language