A girl and her board in Blue Crush 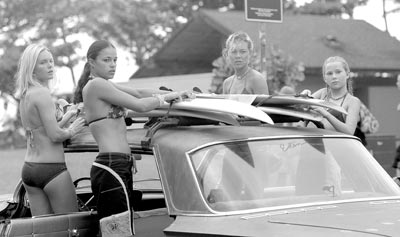 Hollywood is not far from the ocean, which might explain why theres a long history of the specialized genre of surf movies.

Every few years a movie comes out trying to capture the flavor and feel of the surf culture, but unless youre interested, you probably avoid these movies  which are fairly similar.

Blue Crush, the latest surf film, does have a slight twist and it will make you at least want to go to the beach, if not catch a wave.

The twist is not original, but its welcome: This time around the focus is on female surfers in a male dominated sport and the dangers of surfing in general. Theres also campy fun and a straight-out-of-the-book romance as well as some gorgeous surfing shots and Hawaiian scenery.

Having spent my formative years in Hawaii immersed in the hang loose culture, Id have to say the filmmakers get more right than wrong about the way things are there.

Its the scenery that is memorable, not the plot, which is the same old athlete trying to do her best in the face of adversity. Pretty young Anne Marie (Kate Bosworth) lives to surf, but shes having trouble getting over the fact that she almost died doing what she loves. This is holding her back from competing in the Pipe Masters surf competition that is held in her back yard, the North Shore of Oahu.

Anne Marie is physically ready for the competition. We know this because we see her running on the beach, doing sit-ups, pulling her friends while jogging on the ocean bottom and other training methods. Plus, her body is perfect. She is not ready psychologically. We know this because she has nightmares and sudden visions of her head hitting coral.

She can take the snide, territorial remarks from the guys  some of them played by non-acting locals to add authenticity. What Anne Marie has trouble with, other then her fear of drowning, is the fact that her mother abandoned her and her 14-year-old sister to run off with a man. Penny (Mika Boorem Mel Gibsons daughter in The Patriot) is turning into a partying beach bum while Anne Marie just wants her to get an education and be a good girl.

She doesnt want Penny to work as a maid at a local resort, which is what she and her two housemates do. That is until Anne Marie gets fired for telling a guest that hes a slob. Michelle Rodriguez (The Fast and the Furious) and Hawaii native Sanoe Lake are her surfing buddies/housemates.

The slobs friend (cutie Matthew Davis, last seen in Legally Blond), a professional quarterback, is attracted to Anne Marie and asks her to give him surfing lessons. Not surprisingly, surfing is not all they do.

Blue Crush  a pretty lame title  is a girl empowerment movie. Anne Maries quarterback tells her one reason he likes her is because she is not the type of girl to ask a man what to do. This is right after she has an identity crisis and asks him what to do. Never fear, she comes to her senses and does the right thing in the end  of course.

Bosworth, who you might recall from Remember the Titans, is very appealing and did most of her own surfing, as did all the girls. The real big waves were handled by professional doubles. No blue screens were used and you can tell.

For those that know anything about professional womans surfing  not me  youll recognize some familiar faces making cameos.

Blue Crush is a pleasant, slight fantasy, with little to say other than that girls can surf with the boys and Hawaii is pretty. If you demand more than that from your movies you need to look elsewhere.