A letter to Mr. Eastwood regarding Blood Work 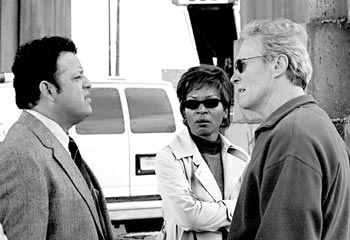 Paul Rodriguez is a Los Angeles cop, Tina Lifford plays a local sheriff and Clint Eastwood is a former FBI agent in a scene from the crime thriller Blood Work.

You are a very talented man and you have had a long stellar career, but I have some sad news for you  you are too old to play a rough, tough cop and you are really too old to be romancing a woman half your age. Sorry to be the barer of bad news.
Your new movie Blood Work is a serviceable crime thriller with some strong points, but when you got lovey-dovey with Wanda De Jesús I couldnt muffle a snicker. Oh please, I thought as I rolled my eyes.

I know that your current wife is some decades younger than you, but youre Clint Eastwood, rich, Academy Award winning director and famous tough guy sex symbol of the last 40 years, not a broken down ex-FBI agent like in the movie.

Honestly, Mr. Eastwood you dont look so good in this movie. I know youre not really supposed to…since you just had a heart transplant…which is why I cant understand why De Jesús would want you for anything other than your crime solving abilities.

Sure, I can understand why you might go for her; she is pretty and vulnerable. You want to be the hero and find the guy who killed her beloved sister and at least one other guy. You want to show up the L. A. cops (played by comic Paul Rodriquez and Dylan Walsh) who dont like you. You want to impress your old friend who is played very well by Tina Lifford. She is cool.

I figured out who the murderer was and why he went about his convoluted scheme long before you and your law enforcement acquaintances did. But hey, Ive seen lots of crime dramas and read lots of mysteries. I must have missed something though; I did not get the last big clue that led you to the killer.

I know you have seen your share of movies as well not to mention directing such fare as Space Cowboys, True Crimes, The Bridges of Madison County, Pale Rider, Sudden Impact and Oscar winner Unforgiven, to name a few.

So I would have thought that you could spot a cliché with your squinty eyes at a hundred yards and blast it out of sight instead of embracing it as it were something clever and new. But no! Your character, Terry McCaleb, lives on a boat and has a wacky friend, Jeff Daniels (Terms of Endearment, Dumb and Dumber), who becomes a partner of sorts. Now really, weve seen that set up so many times in cop movies.

The big showdown that takes place in an abandoned rusty metal structure is so clichéd it hurt to watch. Speaking of hurting, what do you take to soothe your throat muscles after all that low gruff talking? Every syllable seems to strain your vocal cords. I know your voice is not that rough in real life.

Back to the plot. I know Brain Helgeland of L.A. Confidential fame wrote the screenplay from the Micheal Connelly novel, but as director you have ultimate say about what goes in the movie. So, whats with the clichés? And the silly romance that slows things down and adds nothing to the plot?

If there was to be any romance it should have been with your heart doctor played by the lovely, talented and under-used Anjelica Huston (The Royal Tenenbaums). We should see her in more movies.

The investigation aspects of your movie are interesting and ring relatively true, but a scene in the middle where you and Lifford shoot and shoot and shoot at a car and never even graze the driver is another cliché. As is the before-mentioned showdown where guns blaze, but no one gets hit.

Well, Mr. Eastwood I really have enjoyed some of your movies though I thought Unforgiven over-rated and A Perfect World under-appreciated. I cant say Blood Work is one of your best efforts though it does have entertainment value if one doesnt think too much.

One of the reasons it doesnt add up to much is because you cast yourself in the lead. And once again you insist on showing us your 72-year-old chest. As 72-year-old chests go, I suppose its not bad, but I really think its time to keep the shirt on in movies. Relax, have some fun. Play a character part where you can loosen up and not take things so seriously. Where you dont have to lower your voice or raise your shirt.

Rated-R for violence and language