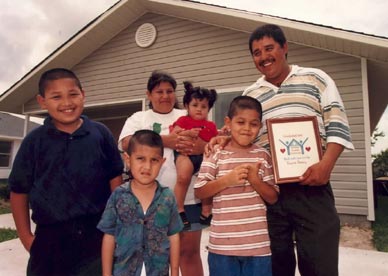 Thanks to Houston Habitat for Humanity, Augustine Duarte and his family have a new home to live in. Duarte, his family and volunteers began constructing the house in April. The build was part of Rebuilding Our Town, a project that constructed 44 homes in the northeast subdivision of Wood Glen. Pictured in front of their new home are (l-r) Augustine Jr., Jamie, Ofelvia, Maritza, Eduardo and Augustine.

After more than a year of being homeless, some Tropical Storm Allison flood victims finally have new homes to live in, thanks to Houston Habitat for Humanity and local faith and corporate partners. At a dedication event recently held in their new neighborhood of Wood Glen, dozens of flood victims received keys to their new homes. As part of the festivities, the new homeowners gave tours of their homes and mingled with their new neighbors in an old-fashioned block party complete with music and BBQ.

The mass move-in is a culmination of the Rebuilding Our Town power build kicked off in April by Houston Habitat for Humanity to help those affected by last years devastating floods.
Now, only four months later, 44 homes have been constructed and nearly 40 flood victims and their families have homes again.

One of the new homeowners, Debra Davis, recalls the horror she felt during Tropical Storm Allison. When the floods hit, we honestly didnt know what we were going to do, said Davis, a single parent of 14-year-old son Dezeral Davis and 17-year-old daughter Jessica Lewis. I had suffered a stroke the day before the rains came. I was at home on bed rest and my neighbors had to carry me out – our house was completely wiped out by the flood. My children have had to live with different relatives since then, but for the grace of God, my family and I are reunited again. Now, Davis and her family have a new home to live in together.

Houston Habitat started this project shortly after the waters receded. Churches and individuals contacted the group to request help for families hit by the floods. Houston Habitat put the wheels into motion by purchasing the land in section three of the Northeast Houston subdivision of Wood Glen and clearing the undeveloped area, which is near the intersection of East Tidwell and Mesa Road. This was the largest land acquisition for the organization since the Jimmy Carter Work Project in 1998, in which 100 homes were built in one week.

This is the largest build weve done since our Jimmy Carter Work Project in 1998, said Milby Hart, executive director for Houston Habitat for Humanity. And now, through the single largest effort to build permanent-housing solutions since the floods of Tropical Storm Allison, we are delighted to give some of these deserving families something that was taken from them – a home.
We spent most of the night on the roof of our house waiting to be rescued, said Tommy Foster who lost everything in the floods and is now a new Habitat homeowner. We were going to get in the attic, but we were afraid of getting trapped in the rising water.

New homeowner Olga Cerda shared her excitement not only for her new home but also for the fact that it was specially designed to meet her childs needs. I will finally be able to provide a safe home for my 30-year-old son Mario who has Tourettes Syndrome, said Cerda. Because Mario has a tendency of hitting his head against windows, Houston Habitat for Humanity worked with 3M to coat all of the windows in our house with a protective film, like foreign embassies use to deflect bombs. They really went the extra mile for us.

The build received tremendous support from local faith and corporate groups and an outpouring of volunteers, said Dave Daniels, development director for Houston Habitat for Humanity. The original goal was to build 42 homes, but we were able to construct 44 homes! Volunteers put in more than 14,000 hours to make this possible. But its only when that time is coupled with the communitys financial support that builds like this are possible. With continued support, this is the first, of many rebuilding events planned as part of the ongoing Rebuilding Our Town effort. In fact, we expect to continue building on the unused land in Wood Glen starting in September.

Since December of 1988, Houston Habitat has housed more than 1,400 people with the construction of more than 350 homes in the Houston area. The group has been honored with numerous awards, including the 2000 Habitat Internationals Millard Fuller Award for Most Homes Built in Middle States Region; the 2000 Carol Vances Helping Hands Community Service Award for the InnerChange Freedom Initiative; the 1999 Energy Star Home Builder of the Year Special Recognition Award; and the 1998 Mayors Proud Partner Award.

The local affiliate of Habitat for Humanity International, Houston Habitat for Humanity is a nonprofit, ecumenical Christian housing ministry. It is dedicated to eliminating sub-standard housing in the city of Houston by helping low-income families earn a safe, decent home to live and raise their children. By relying on volunteer labor and acquiring building materials and professional services through donations or at-cost, Houston Habitat can build quality homes and pass the savings along to partner families (buyers). To find out how you can help in future builds, please call Dave Daniels at 713-671-9993, ext. 14 or visit
www.houstonhabitat.org.