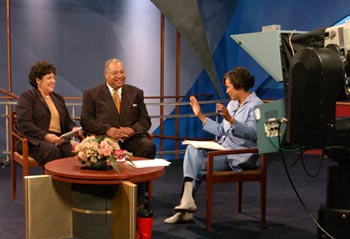 African-American and Hispanic school board members from across the nation gather in Houston from 7:00-9:00 p.m. on Thursday August 15th, for a public Town Hall Meeting to discuss Closing the Literacy Gap.

Hosted by Houston Community College System and sponsored by the college, the African-American Caucus of the National Alliance of School Board Members, HISD and North Forest ISD, the town hall meeting will be held in Studio A of the HCCS television station which is located in the Administration Building at 3100 Main Street.

The public is invited attend and participate. The studio doors will close at 6:30 p.m. to prepare for the live broadcast which will air live on cable channel 19.

The Town Hall Meeting prefaces a three day Closing the Literacy Gap summit of the African-American Caucus that begins Thursday and is aimed at formalizing national strategies that can result in policy decisions to help close the literacy gap in America.

HCCS Trustees Bruce Austin and Yolanda Navarro Flores were guests on Crossroads, a local television talk show, on Sunday to discuss the summit and the serious problem of illiteracy in our nation, state and city.

He added, $17.9 billion of that loss is in Texas.
Navarro Flores discussed one major cause of illiteracy-secondary school dropouts.

According to the Texas Education Agency, she said, 17,563 students in grades 7-12 dropped out of school last year alone in Texas and 2,844 of those were Houston school dropouts.

Praising the African-American Caucus for addressing the problem, Navarro Flores added the percentage of dropouts averages three to four times greater for Hispanic and African-American students than for white students.

Both trustees praised HCCS for its battle against illiteracy. In operation for more than three decades, the colleges Adult Education program has served 546,727 out-of-school adults with Adult Basic Education, GED preparation, English as a Second Language, or Adult High School classes. HCCS is the fiscal agent for the Houston Literacy Consortium, a 12-partner literacy consortium that is the largest in Texas.