To recognize a hundred years of discovery and creativity, the Houston Museum of Natural Science will host Cultures of Creativity: The Centennial Exhibition of the Nobel Prize beginning February 7,2003. Houston is the exhibitions first venue in the United States after an international tour that includes Stockholm, Oslo, Tokyo and Seoul.Since the first Nobel Prize was awarded in 1901, more than 700 people have been honored for their work in physics, chemistry, medicine, literature, economics and peacemaking that led to the knowledge explosion of the 21st century. Cultures of Creativity captures these achievements and expresses it in the context of creative experiences that have changed the world.

Videos and artifacts present the environments that foster creative scientific thinking and encourage the exchange of ideas. At the entrance of the exhibition, visitors enter the Nobel Market featuring the most recent Laureates, including a century of Nobel Prizes, summarizing their achievements over the last hundred years and ending a with a Nobel Awards Banquet setting. Visitors will be greeted by Albert Einstein and Madame Curie characters roaming throughout the exhibit during peak times. These characters will enhance the exhibit by providing an opportunity to answer questions and help bring the exhibit to life.

Two theaters occupy the center of the Gallery. The Milieus Theater describes cities, universities and laboratories that served as meeting places for Nobel Laureates and were characterized by their pluralism and diversity, concentration of expertise, communication and cross-disciplinary interaction and unconventional structure. The other theater features stories of individual creativity in a variety of environments. Accompanying these stories are artifacts that were instrumental in each Laureates life and work, such as economics prize-winner Amartya Sens bicycle; poet Nelly Sachs music box; novelist Selma Lagerlofs walking shoes; the 14 Dalai Lamas pencil and physicist Marie Curies scientific instruments.

Cultures of Creativity would not exist if it were not for Alfred Nobels remarkable which underlies the entire Nobel system, along with the international perspective that distinguished his life and will. Why was he willing to endow an international prize with his entire fortune? The idea of giving away his fortune was no passing fancy for Nobel. Efforts to promote peace were close to his heart and he derived intellectual pleasure from literature, while science built the foundation for his own activities as a technological researcher and inventor.

Nobel  idealist, inventor, and entrepreneur  invented dynamite in 1866 and later built and expanded companies and laboratories in more than 20 countries all over the world. A holder of more than 350 patents, he also wrote poetry and drama and even seriously considered becoming a writer.

On November 27, 1895, Nobel signed his final will and testament at the Swedish-Norwegian Club in Paris. He died of a cerebral hemorrhage at his home in San Remo, Italy on December 10, 1896.

What is creativity and how can creative activity best be encouraged? Which is more important to the creative process: the individual or the environment in which their work is carried out? Cultures of Creativity captures a century of achievement and expresses it in the context of creative experiences that have changed the world. 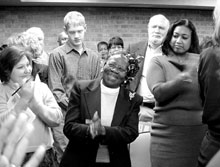 Jewell Simpson Houston, center, received a standing ovation from the audience at the Jan. 14 meeting of the Aldine ISD Board of Education after trustees named the newest intermediate school in her honor. Jewell Simpson Houston Academy will open at the beginning of the 2003-04 school year and will be located in the Carver area. Mrs. Houston devoted 34 years of her life to the children of Aldine serving as a teacher and a counselor.

During the Jan. 14 Aldine ISD Board of Education meeting, trustees unanimously approved the naming of the new intermediate school in the Carver area after Jewell Simpson Houston. Board Vice President Dr. Viola Garcia, who chairs the boards school names committee, said the committee reviewed several names that were submitted by the community and decided on naming the school after Mrs. Houston because of the more than 50 years she served the district and the Acres Homes community. The school will be named Jewell Simpson Houston Academy and will serve fifth and sixth grade students.

Mrs. Houston began her teaching career in 1951 as a teacher at Carver Elementary School. In 1966, she served as a counselor at Carver High School where she guided hundreds of students over the course of eight years until 1974 when she accepted a counseling position at Eisenhower High School. She remained at Eisenhower until her retirement in June of 1985. She served the district for 34 years.

In addition to her years working in Aldine, Mrs. Houston has also served on numerous state and civic associations including the Houston League of Professional and Business Clubs, the Ferguson Street Civic Club and the Acres Homes Multi-service Center.

She has been honored at the local, state and national levels for the significant impact she has made in the lives of children.

Aldine ISD graduate and former U.S. Rep. Floyd Flakes once honored her on the House floor by saying, I rise to pay tribute to a woman who has spent the greater part of her life working to mold the lives of young people through her unselfish and tireless work as a teacher, counselor, community, and church worker, and friend.

Mrs. Simpson, who received a standing ovation from the board and members of the audience, said she was thrilled to have a school named after her.
I am proud, and I am thankful, because this is quite an honor, she said. Tonight I am excited about what the Aldine Independent School District has become.

Mrs. Houston said she will be on hand when the doors of Jewell Simpson Houston Academy open on the first day of the 2003-04 school year.
I hope when my school opens that the children will just come excited every day. Let it be a school that glows, she said.

The board also named the new elementary located on Bammel North Houston Road, Aldine Elementary School. Both schools, along with another elementary school on Airline Drive, will open at the beginning of the 2003-04 school year.