METRO will bring its public showing of the new Mobility Plan to the Aldine area this Thursday night, for information and to get feedback from the public.

Anyone missing this meeting has other opportunities, including Monday, May 19th at Greenspoint Mall Community Room, 6 to 8 pm.

The Mobility Plan is already a controversial issue, with Houston Mayoral candidates taking sides, and State Senator Jon Lindsay offering a bill that would disallow funding for a rail plan at the expense of road improvements. Others have criticized the redistribution of most of the money that METRO now receives from the 1 per cent sales tax to transit, both rail and bus, instead of street and sidewalk repairs where much of it is now used.

Other issues of interest to the Aldine community include the actual right of way alignment, and whether connector buses will feed into the transit stations, and where. A line north to Intercontinental Airport must find an alignment along Airline or Hardy, according to some sources. And bus feeder routes along Aldine Mail, Little York, Aldine-Bender, and other cross streets have not been defined or promised. A rail line is also shown along US59 as a future possibility, but no definite plans have been revealed.

The METRO Solutions Draft Plan was presented to the METRO Board at a workshop last month. Crafted over 18 months with expert studies and community input, the draft plan provides transportation solutions for a growing Houston – which will be home to two million more people in the next 20 years.

The draft plan includes 41 miles of light rail extensions that would connect to the 7.5-mile downtown METROrail line, debuting Jan. 1, 2004. It also calls for eight miles of commuter rail to southwest Harris County, if this proves to be feasible; additional Park & Ride lots and Transit Centers; an increase in High Occupancy Vehicle (HOV) lanes and the introduction of two-way HOV. Expanded METROLift service and additional bus routes and service, including connections between rail stations, are also part of the plan.

“Building more streets and freeways alone is not the answer to meet the demands of our growing city,” said Board Chairman Arthur Louis Schechter. “With input from the community, we are creating a long-range strategy to find solutions today for the Houston of tomorrow.”

Studies on several high-traffic areas or corridors in the region were conducted in partnership with other agencies – TxDOT, Houston-Galveston Area Council, City of Houston and Harris County – as well as with active participation from residents and businesses in each area.

“Our vision for the future gives Houstonians more choices, more places to go and easier ways to get there,” said METRO President & Chief Executive Officer Shirley A. DeLibero. “It also takes into consideration the expected growth in population of an additional two million people.”

Before the draft plan is finalized, another series of public meetings will occur during May. The first meeting is set for May 5 at METRO headquarters, 1201 Louisiana. A total of 14 public meetings will be held at locations across the region. After considering public comments from this final round of meetings, the Board is expected to approve the final plan in July.

A summary of the draft plan will be available on METRO’s Web site. 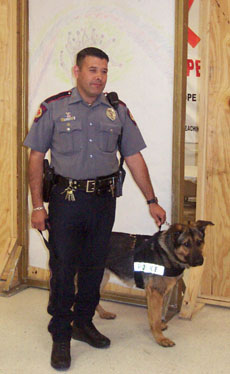 Police have charged an assistant principal at Caraway Intermediate school with possession of marijuana, and she has resigned her position.

The incident happened last Wednesday, when Aldine ISD police conducted a search in the schools faculty parking lot, with the aid of their drug dog, Agbar.

The assistant principal, Kathy MacLennon, 44, was asked for permission to search her car, which she granted, according to school officials. The police then found 6-1/2 grams of the marijuana in her purse, in the trunk of her car. The charge is a misdemeanor.

According to AISD spokesperson Mike Keeney, MacLennon has worked for the district since 1987, and at Caraway for 8 years.

The drug dog is assigned to the AISD police force and partially paid for by the Aldine Community Improvement District. It is routinely used for searches on all the campuses of AISD.