All hat and no cattle? Not this cowboy, Gene…

Howdy, yall. I guess Im gonna have to sell my horses and tractors at the ol Rancho Pequito. Thats right. None other than the infamous, and incredibly humble Gene The Weenie Green, has declared me All Hat and no cattle. I probably ought to just shut up and listen to The Weenie since I have a real knack for creating facts when the truth doesnt meet with my skewed point of view. By the way Gene, I dont buy the space for my column, its provided by the paper.

A few quick observations for our learned congressman. The only group trying to disenfranchise Texans is the Liberal Democrat Party. We, the people, are getting pretty fed up with that tired cliché.

The term tyranny of the majority and the drivel following, seems fine as long as the majority is Republican. However, all those years when the majority was Liberal Democrats, it didnt apply. Something is wrong with that reasoning, congressman, but then you are now the oppressed, arent you?

And there you go again! Telling us that those WEENIE democrats who skipped their responsibilities and ran to Oklahoma, stood against tyranny, and that is the definition of a hero. Boy, did you have to twist and turn to get that to work. I bet you look like a pretzel! Evidently, Hillary and Bill taught you quite well. We now have a new victim class in Texas: Democrat congressmen.

Congressman, I am a registered Independent. I have never been a Republican. I dont control, nor do I own any Republicans. I believe the readers of this paper would like to know who you are referring to as, Lloyds
Republicans, I know I would. I have never even talked to a Republican Party person, although I will be talking to your opponent next year, you can bank on that! The line from a movie fits you here, congressman, Be afraid. Be very, very afraid.

Gene, I do not want anyone to think you are not a decent human being, because I think you may be. However, you have been around some pretty bad people in Washington Town and it seems to have rubbed off. Your politics are out of step with Texans, no matter how much you sound off about all your support of conservative issues for your district. The fact that you first notice a persons ethnic background, rather than they are Americans, shows that you are still a Liberal. Talk is cheap and irrelevant. If you truly believe you stand for conservative values, change your party affiliation. If you are just sayin the words, stay where you are. You are judged by the company you keep. As I told you once, already, you need to choose some new friends, Gene.

Folks, you make the call. Youve heard, or read, both sides. I have no political agenda and I trust you, but since Im not runnin for office, I have nothin to loose. Gene does.
Probably the best two things about The WEENIE readin and responding to my column is first, he does know how to read, and secondly, if hes readin Horsefeathers, he is takin time away from Washington, and therefore, stayin out of our business! Thanks, Gene.

You all let me know if I outa sell Rancho Pequito. Ive had quite a few folks tell me, Git em, cowboy! I may have to put a guard at the gate to keep it closed, sos all of Lloyds Republicans wont overwhelm the place.

I hope you all are enjoyin hearin from ol Gene The WEENIE. I know I sure am!

‘Til next time,
Your Pard,
Just a Ridin,
Lloyd 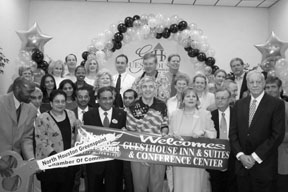 A new conference center and hotel facility opened last Thursday night with an Open House for guests and the business community.

Featured speaker at the Open House was Jim Mattress Mack McIngvale of Gallery Furniture, who spoke about his career and the principles he has followed to build and sustain a successful business in Houston.

The hotel, on Airtex and I-45, is 109 rooms plus the new Pebbles Conference Center, with 7500 square feet of space for meetings and social functions. They specifically are hosting weddings, parties, banquets, seminars, and corporate events, according to marketing manager Betty Carr.

This event was sponsored by the North Houston Greenspoint Chamber of Commerce, as a Business after Hours/Mixer for members and guests in the business community. The next Chamber event is a Brown Bag seminar on Wednesday, July 23, entitled True Colors, presented by Brian Dooley of North Harris College. Call the Chamber at 281-872-8700 for details.