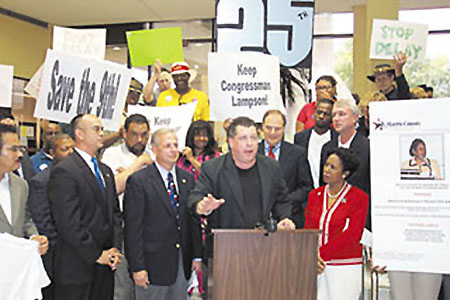 HOUSTON– Democratic politicians, representing the Legislature in Austin and Congress in Washington, joined in a rally this Saturday on the TSU campus.

The event was held just outside the meeting room where the State Legislature was holding public hearings to get opinions on the proposed Redistricting bill that will be the subject of the Special Session of the Legislature when it reconvenes on June 30th in Austin.

The issue which is dividing both the voters and the politicians is whether the Legislature has a need or a mandate to redraw the voting district boundaries based on the new 2000 Census. When the last Legislature failed to do this in 2001, the courts drew the lines. Now, the argument is that if they are redrawn for the next election, the Republican party will win about 5 more seats in the Texas delegation at the expense of the Democrats that now hold office, and the 25th district held by Chris Bell will disappear and reappear as a new district in South Texas. The Texas Attorney General has ruled that the constitution does not require the present Legislature to redraw the lines, prior to 2010. However, powerful politicians led by Sugarland Congressman Tom DeLay want the changes now, to win the seats in the next election and solidify the majority that the Republicans hold in Congress.

Speakers at the TSU rally included Garnett Coleman, Jessica Farrar, Joe Moreno, Rick Noliega, Kevin Bailey, Congressman Gene Green, Chris Bell, Nick Lampson and Sheila Jackson Lee. Their messages were similar, that DeLay and the Republicans, including Governor Rick Perry, were attempting to force a redistricting only for the purposes of a partisan victory and to gain more seats, and that this was in the worst interests of democracy and the constitutional process.

A sampling of comments from the Speakers:

Bailey: We all have to work together to stop them.

Green: These Democrats that went to Oklahoma to break the quorum are Texas Heroes.

Lampson: This redistricting issue is changing the atmosphere in Washington, making it more partisan. It is creating chaos and division.

Noriega: This is an attempted Republican coup. I say, Dont Mess with Texas.

Meanwhile, both the House and the Senate of the Legislature are holding hearings around the state prior to the special session, to get citizen output on the desire for redistricting.

At the present time, it is thought that the Democrats will not walk out of the session this time, but will lose the vote on the redrawn map. However, it will then go to the Senate, where by the rules of the Senate, the Republicans do not have a 2/3 majority, and the will will die without action.

(Also be sure to read this week’s Horsefeathers for Lloyd Shelby’s column about the redistricting.)