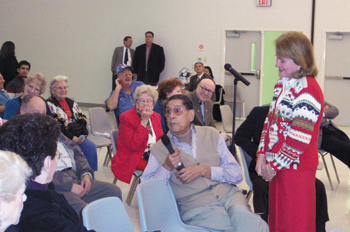 By GILBERT HOFFMAN
NORTHEAST Hundreds of people came to Commissioner Sylvia Garcias Town Meeting last Thursday night, at the Northeast Community Center on Bentley. They represented most of the neighborhoods and civic organizations from the immediate Precinct 2 area, and some outlying City areas, as well.
After opening remarks by Commissioner Garcia, which emphasized the achievements in Precinct 2, and an explanation of the services which she offers to citizens, the floor was opened to questions and comments.
The overwhelming tone of these remarks, was that for many years the areas around the near Northeast have been neglected by the County, and also the City, and as a result homes and people have suffered from too much flooding, abandoned trash, overgrown weeds, blocked ditches, vagrants on street corners, and other forms of neglect.
The speakers seemed to think that the County was favoring other areas, and not the Northeast.

The first woman to ask a question and make a statement, said that maintenance in the Precinct had deteriorated since Squatty Lyons had been commissioner, and that her street, Rosemary Street had flooded for the first time this summer, after 38 years in which she had no problem.
This theme, that flooding in 2002 was unusual, would be echoed by many speakers during the evening.
Garcia brought with her many of her staff, each with special responsibilities for some of the functions that were being questioned. In addition, she brought some consultants to the County, and law enforcement officials from several agencies.
When appropriate, she referred the questions to an official, either for an answer or further study and follow-up.
For instance, a question on underage purchase of alcohol was handed to Harry Schreffler, a TABC officer that was present. He promised to investigate, prosecute of warranted, and asked the audience to call in any violations to 1-888-THE-TABC. He stated that all reports were investigated.
Commissioner Garcia fielded several questions on inadequate drainage that seems to be getting worse. However, she said that she had formed two task forces that would bring some solutions to everyday problems that the Precinct had reported.
One of these is known as D.I.G., or Drainage Improvement Group. The are department heads that are charged with fixing the sewers and open ditches to improve run-off flow.
The other team she formed is known as S.W.A.T. and is charged with fighting mosquitos in a more effective manner.
A member of State Senator Gallegos staff, who lives in the area, pointed out that no METRO representative was present, and that transit service had deteriorated in the recent time period.
Garcia returned to the drainage issue, and noted that the City was attempting to solve some of the problems of flooding by instituting a Drainage Fee, but that unfortunately it had been structured to include County property, schools, churches and hospitals, all of which have statuatory exemption from city taxes. Of course, the argument is whether this is actually a tax, or a user fee. Garcia suggested that when this is resolved in a satisfactory way, she believes a fee to maintain drainage elements will help solve many of the complaints.
Several speakers pointed out that trash, ditch maintenance, and blocked sewers were a result of the city being unwilling, or financially unable, to coordinate their work on infrastructure near unincorporated county residences.
Garcia introduced attorney Bob Stokes, representing Texas Young Lawyers and County Attorney Mike Staffords office. Stokes is working with a new group, ASAW, a volunteer attorneys team that want to help achieve Affordable Sewer And Water systems in the county.
Another audience member thought that a program of public education to teach people to keep ditches and streets clean, in both Spanish and English, would help solve the problems. Some in the audience wondered why she was not aware of a similar effort that had been undertaken in the Aldine Improvement District.
Another respondent asked why the lower North side of Houston did not have a Community Center like the one on Bentley. Garcia promised that was one of her goals, but that she was only now formulating her budget for the next three years of her term.
Crime prevention, and the elimination of undesirables or vagrants that hang around stores on Jensen and get drunk in public, was another complaint. Law officials present, from HPD, said they would investigate and enforce the laws.
Garcia pointed out that her staff keeps track of all calls that come to her office, and each complaint is followed up and resolved. She encouraged everyone to call her with problems, and also to let her know if there is not a satisfactory resolution.
Steve Brewer, Garcias chief of staff, indicated that the evening was a success from their standpoint, and that the Commissioner planned at least two other town meeting in 2004 in other sections of the Precinct.