Weather: Wonderful! (And freezing.) Can we say “humidity”? Not in Pittsburgh!
Freshman Fifteen: Um, don’t ask
Classes: Calculus, chemistry, computer programming, philosophy and a freshman seminar on psychology.
No. of Times Locked Out of Room: 12.
Pints of Ben & Jerry’s Consumed: 5.

Before I left for college — or maybe sometime during the 26 hour road trip up to Pittsburgh — I asked my dad if I could write a column for his paper while I was at school. He of course said yes, but seeing as I was his little baby girl going away for four years, I probably could have asked for a small island off the coast of Africa and gotten it. (I decided to put that on my Christmas list instead.)

So in the true fashion of a college student — or a journalist — I’m turning this little composition in late. Very late. I’ve already been here at Carnegie Mellon University (CMU) for an entire semester

And I love it!

I moved in on a Tuesday, met my roommate, and then spent much time deciding just what my parents needed to buy for me, since, in the Hoffman tradition, we’d left a good many necessities at home. While they were slugging through Target with 800 other freshman parents, I was playing 20 million ice-breakers and listening to 60 speeches per hour about CMU, “healthy student life,” and my future. This was all part of our week-long Orientation, which is a lot like summer camp but without the bonfires and bugs. My favorite activity was probably House Wars, a big competition between the freshmen in all the dorms, which does absolutely nothing to “orient” you to the school but was definitely what made me fall in love with CMU. (And who won? Why, my dorm of course!)

Classes began the following week, and after a couple very productive meetings with my academic adviser (and his Labrador pup Butterscotch) I managed to create a schedule that wouldn’t kill me. My favorite course was chemistry — if you knew me, your jaw would be on the floor right now — because my professor is just cool beyond belief: for the first month he blew something up in every single lecture! I mean, how can you not enjoy a class that produces fireballs bigger than your own body? (Yes, he did indeed set off the fire alarm, but only once!)

I learned that all college students live and die by their cell phones, and Free Nights and Weekends is a gift from the heavens. In the first couple of weeks I could walk around at 8:59 p.m. and see all my floor mates getting out their phones, ready to dial right on the turn of the hour. One guy even went so far as to say “I could lose my arm in a horrible accident, and no one would know about it until after 9 p.m.”

In addition to cell phones, email and AOL Instant Messenger (AIM) have allowed me to keep in touch with the people I miss and care about. I even taught my dad — at his request — how to use AIM before I left so that we could chat every now and then while we were both working late at night. It’s obviously not the same as getting to see each other, but it’s close: his jokes are just as corny over the internet as they are in person.

So far my biggest problem has been the lack of edibles. See, our meal plans provide for plenty of “food,” but what use is having lots when none of it’s any good? And if anything actually tastes decent enough to swallow, it’s safe to assume that it contains 10 times the amount of fat you’re supposed to consume in a week. So although I was determined not to gain the infamous Freshman Fifteen Uh, let’s just say that I got an unanticipated wake up call.

Another effect college is having on me that I certainly did not expect is the revival of my love for sports. Almost every night the guys on my floor are crowded around the television rooting for some team or another, and slowly but surely they’re sucking us girls there with them. I’m now hopelessly compelled to watch playoffs and shout at the TV screen when things don’t go my way. Soon I’ll be that crazy college student waving the foam finger, throwing popcorn at the opposing team, and shouting obscenities at the referee.

Dorm life is both exactly as I expected and nothing at all like I imagined. My RA — Resident Adviser, the non-freshman who lives with us and helps us through our first year — is beyond awesome. He organized trips for our floor every weekend for the first month — and one of the perks of being a poor college student is free/reduced admission to most of the museums, stadiums and other venues. Thanks to those forays into the city, we managed to bond pretty quickly and we all get along well. Occasionally our closeness turns against us — in other words, “drama” arises — but for the most part, we have each other’s backs, teach each other the things we don’t get out of class, and goof around. (A lot.)

Basically, the things you really learn in college are the following:
– How to nap properly.
– How to take care of a lot of drunk people with limited resources. (Parents, if you love your kids, don’t put chocolate in those care packages; we need paper towels, trash cans, and Febreeze!!)
– How to write an 8-page paper in 4 hours, when you were given 4 weeks to do it.
– How to not get sick when your roommate does.
– How to hear the word “FREE” from across campus.

END_OF_DOCUMENT_TOKEN_TO_BE_REPLACED

Aldine Improvement Board met last Tuesday evening, and a large portion of the business was reconstituting the board, due to resignations and departures.

Five appointments were made to the board, including new members Bob Beasley, John Beaudion Jr., James Murnane, and reappointments of Reyes Garcia and Clyde Bailey.

Well known community activists Sylvia Bolling, Leland Jauer, and Steve Mead were replaced. The first two have resigned for personal reasons, and Mead was forced to leave the board after a legal ruling by AID attorneys, conferring with state authorities, determined that Meads swearing in to an unexpired term on the Aldine school board automatically required him to leave the AID board to avoid a conflict of interest. The exact wording in the ruling was that the offices are not compatible.

The new members include Bob Beasley of Beasley Tire Company, John Beaudion Jr. from Commissioner El Franco Lees Precinct One office, and James Murnane, president/CEO of North Houston Bank. However, none of these appointments are official, and they are all subject to ratification of the Harris County Commissioners Court, and could possibly be revised, AID officials noted. The board has a total of 9 members, so this means 5 are new appointments or reappointments.

[see full story in your local copy of the Northeast News]

END_OF_DOCUMENT_TOKEN_TO_BE_REPLACED

One person died and two others were injured when a Dodge Spirit collided with an Aldine school bus Wed. Feb. 11 at 4:40 p.m.

The bus was traveling northbound on Vickery and turning left to go westbound on East Mount Houston. The initial police report said the bus failed to yield the right of way.

The Dodge Spirit was traveling eastbound on East Mount Houston when it struck the right side of the bus.

The three passengers in the spirit were injured. The front passenger died later that evening at Ben Taub from injuries sustained during the accident.

The bus was empty except for the driver. All the students had already been dropped off and the bus was heading back to the garage.

END_OF_DOCUMENT_TOKEN_TO_BE_REPLACED

Aldine Y.O.U.T.H. lost half of its budget last fall, but that hasnt stopped them from expanding.

In November the community center which has been designated a Violence Free Zone learned that it would lose a grant from the National Center on Neighborhood Enterprises. The nature of the grant had changed and Aldine Y.O.U.T.H. no longer qualified for the monies.

Rather than let that the significant blow get them down, the board of directors decided to look at this challenge as a blessing in disguise.

I look at the funding that left us as an opportunity for new growth where people can come and plant their seeds and let it grow. I hope the grant we lost can be replaced with abundance, said Sylvia Bolling, founder and director at Aldine Y.O.U.T.H.

Though they have yet to make up for the lost grant, the centers board of directors decided to move ahead and start a long awaited resale shop on the property.

For the last year, Bolling has been planning a resale shop for the area, which she says desparately needs one. Money made by the business will help to keep the centers doors open.

It will also serve as a hands-on internship for teens in the soon to be formed Taking Care of Business Youth School (TCB).

[see full story in your local copy of the Northeast News]

END_OF_DOCUMENT_TOKEN_TO_BE_REPLACED 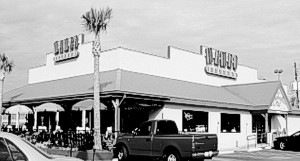 A fun atmosphere, great food, and reasonable prices keep diners coming back for more at the Mambos family of restaurants.

As soon as you enter the door at Mambo Seafood, you know you are in for a good time. A brightly-lit jukebox in the middle of the room fills the bright, open dining room with upbeat tunes.

The cocktail bar, neon lit signs, and condiments stored in 6-pack holders at each table gives Mambos an icehouse feel. But the restaurant is a family-friendly place for anyone to go for a good time.

The restaurant offers a non-smoking section inside or customers may smoke out on the patio under multicolored umbrellas.

The patio is really the big thing at this location. When youre driving down the freeway, it looks like, This is a fun place. I really want to be there, said general manager Joel Moreno.

The food tastes as good as the place looks. Fresh seafood is displayed on ice at the counter. Customers can buy by the plate or by the pound.

This is like a fish market. You can buy it either fresh or we can cook it for you, Moreno explained.

Lobster Ranchero, oysters on the half shell, and grilled or fried shrimp are the top selling plates. Everybodys been telling me about the scampi shrimp, said one patron visiting from San Antonio. His friends told him he had to come to Houston to eat at Mambos.

A constant favorite with customers is the fried seafood combos. Diners take their choice of one or two items and get sides of fries and Mambo shrimp rice for just $7.95.

No matter what your choice, a side of Mambo shrimp rice is an excellent addition. Made fresh when you order it, this fried rice flavored with Mambos secret spices is sure to keep you coming back.