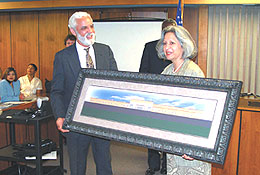 Willman “Bill” Plummer spent 28 years overseeing the construction of schools and support facilities in Aldine ISD. He oversaw a number of major construction projects and helped the district grow into one of the best constructed school districts in the state, and to honor Plummer for his years of dedication to the students and staff of the district, the Aldine Board of Education will name the districts newest middle school after him.

The board gave its unanimous approval to name the districts ninth middle school in Plummers honor during the May 18 board meeting. Willman “Bill” Plummer Middle School will open at the start of the 2005-06 school year and will be located at 11429 Spears Road.

Plummer was deeply moved by the board s decision. “To the board, to the administration, to everyone who was involved, I thank you,” said Plummer, who was joined by numerous family members and friends for the joyous occasion. “This is a wonderful, wonderful school district. My heart is in this school district and I am honored.”

During the board meeting, trustees praised Plummer for his ingenuity and expertise in helping build Aldine into one of the most efficiently constructed school districts in the state of Texas.