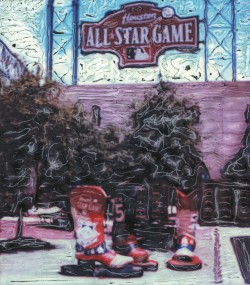 HOUSTON – From Greenspoint to Aldine to Downtown Houston, all eyes were on Minute Maid Park and the surrounding area from last weekend through this Tuesday night, as the Major League brought their All Star game to Houston.

Thousands of fans assembled starting last weekend at the Fan Fest, being held at the Brown Convention Center, with memorabilia, interactive games, all star player autograph signings, and historical exhibits as some of the highlights of this event.

Other events that have entertained fans who cannot get into the sold out game are the Main Event, an urban block party each night on Main Street, Home Run Derby on Monday night at the Ballpark, and a nightly parade of the Budweiser Clydesdale horses.

Many of the thousands of participants are getting their first exposure to the revitalized downtown Houston and the Metro light rail system, and comments have been very favorable.

The Houston Police Department along with other local, state and federal law enforcement agencies with the assistance of Major League Baseball security have been diligently planning and making security preparations for the July 13 Major League Baseball All-Star game. Although the exact details of the security plan can not be shared, there is some basic information citizens need to be aware of that will make getting around downtown and the area surrounding Minute Maid Park a little easier.

Street Closures
Around Minute Maid Park: North at Congress, South at Texas, East at Hamilton and West at Crawford. These street closures that have been approved by the City of Houston for the All-Star events. You can view the information and maps via the link at the top of the home page at www. DowntownStreets.com.

Main Event – Downtown: Streets will be closed on Main Street from Congress to the North and Texas to the South. The Downtown Entertainment District Alliances (DEDA) website page has a list of all-star baseball-related activities and a list of the events being held this weekend at www.houston theaterdistrict.org.

Security Concerns
Counterfeit Merchandise: HPD officials had a news conference Wednesday morning at Minute Maid Park to warn vendors of counterfeit gear not to show up for the game at the ballpark or at other events beginning Friday. Theyll be on the lookout for phony jerseys, caps and game-day tickets. Uniformed and plainclothes HPD officers and MLB workers will mingle with crowds, looking for sellers. Knockoffs will be seized and the sellers arrested and face fines of up to $2 million and 99 years in prison.

At the Ball Park: A no-fly zone will be in effect during the game as required by Federal Aviation Administration regulations. Park attendants will be using hand-held scanners to check barcodes on tickets. All-Star Game tickets will also be fed through a machine that can read embedded coding. Expect security measures similar to those on Astros game days. Binoculars and cameras will be allowed in the park, but coolers will not. Backpacks and purses will be searched and metal-detector wands will be used. Main Event: Plain clothed as well as uniformed officers will monitor the crowds that gather for the festivities and parties planned on Main Street. They will be watching for any unruly and or suspicious behavior that would jeopardize public safety. Uniformed officers working approved extra-jobs at many of the downtown bars will also watch for law violators.