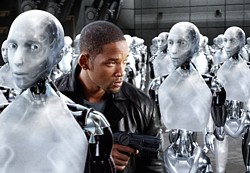 Just got back from seeing I, Robot, and Ive got two words for ya: I, Robbed.

Director Alex Proyas and screenwriters Jeff Vintar and Akiva Goldsman (writers who gave us Batman and Robin and Lost in Space) have taken Isaac Asimovs classic and thought-provoking stories and turned them into Bad Bots 2035, complete with a blustering, overwrought police chief (Chi McBride, who parodied the same role in Undercover Brother), lots of CGI, chases, explosions and riveting dialogue exchanges like this:

Youre the dumbest smart person I ever met.

Yeah? Well youre the dumbest dumb person I ever met.

I, Robot stars Will Smith as … well, Will Smith; but were supposed to believe hes Del Spooner, a too-hip-to-be-seen-with-you, wise-cracking, renegade cop who plays by his own rules, and not the guy you saw in Bad Boys or any other Will Smith movie. Spooner is investigating the apparent suicide of a scientist who invented a new line of ultra-sophisticated robots. Spooner, technophobic dude that he is, suspects a robot named Sonny murdered the scientist.

This doesnt go over too well with the head of U.S. Robotics (Bruce Greenwood), the obvious villain of the movie. The company is about to roll out its new line of robots, and having a robot arrested for murder would bankrupt the company.

The new robots, interestingly enough, have evolved, supposedly, into sentient beings and have decided amongst themselves to take over the planet.

Cue Will Smith to say, Aw, hell no! and let the whiz-bang-BOOM begin.

I, Robot is a disappointment because not only does it betray Asimovs original material, but also because Proyas is a gifted and intelligent director who gave us the amazing cult-classic Dark City, which showed that science-fiction films can be both beautiful to watch and mentally engaging. If you havent seen Dark City, I highly recommend you rent  or buy  the DVD instead of wasting your time with I, Robot.