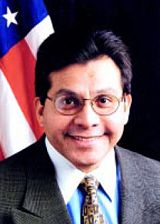 WASHINGTON, DC  The U. S. Senate has confirmed Alberto Gonzales of Houston as the new Attorney General of the United States, replacing John Ashcroft. Gonzales endured a difficult series of questions during Senate hearings on his confirmation. He is considered to be the author of several controversial rulings on treatment of prisoners held for terrorism acts in several prisons. But shortly after the Senate acted last Thursday, Gonzales was actually sworn into office by Vice President Dick Cheney in a ceremony held at the White House.

Gonzales becomes the first Hispanic Attorney General, and as Senator Mel Martinez said, “This is a breakthrough of incredible magnitude for Hispanic-American… Gonzales is a role model for the next generation.”

END_OF_DOCUMENT_TOKEN_TO_BE_REPLACED 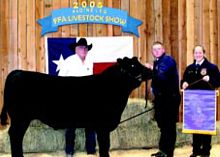 ALDINE  The FFA from the district’s four high schools held their annual livestock show and sale last Friday evening, with a large turnout of exhibitors and buyers, and prices for the student projects were in general higher than previous years.

This is good news for the support of the FFA program, and for the hopes of the students because much of the money goes into scholarships for the students in the program, according to Superintendent Nadine Kujawa.

END_OF_DOCUMENT_TOKEN_TO_BE_REPLACED 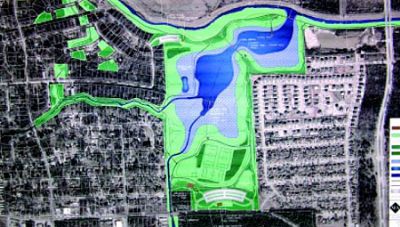 The Aldine Improvement District unveiled at last Thursday’s North Houston Business Luncheon, the latest of two plans that are being developed for the flood retention site along Green’s Bayou where the West Fork joins.

As seen in the accompanying map to the left, the park would encompass about 100 acres, and would be termed a “wet bottom” retainage basin. Lauder Road is at the bottom of the map, and Greens Bayou across the top. At the right is JFK Boulevard, and on the left Aldine-Westfield. Crowley Park is farther east along the Bayou, and might eventually be linked to this park.

However, this would provide opportunities for recreation, with two small lakes shown, that might incorporate fishing docks and small boat usage. In addition, the wet areas shown in the map include something termed a “doggy pool,” an unusual exercise facility for thosedogs who naturally enjoy or require swimming in a body of water, something that can be difficult in the city.

At the bottom of the map are shown several types of ball fields, soccer, baseball/softball, and tennis courts. Adjacent to these is an extensive parking area. In addition, there would be picnic areas, walking and bike trails, and viewing areas.

AID chairman Clyde Bailey has suggested that a site might also be found for a community building in the vicinity of the park.

END_OF_DOCUMENT_TOKEN_TO_BE_REPLACED 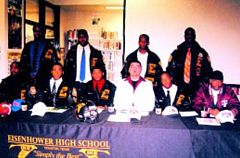 The head coaches at Aldine High, MacArthur High and Nimitz High said they did not have any players sign on Feb. 2, National Signing Day, but should have some players sign with various schools at a later date.