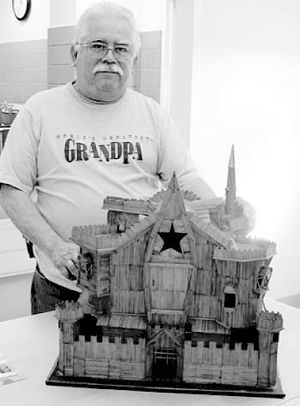 Last Wednesday the senior citizens at the North East Community Center recaptured the awe and wonder of childhood as they looked at a display of buildings and other objects built entirely of wooden matchsticks.

“I don’t think there is anyone else out there with this kind of exhibit,” said the models’ builder Felix Rodriguez.

The long tables held exact replicas of the Alamo and several old missions in Texas, some even with an altar inside. There was also an entire old western town, complete with a chair inside the barber’s shop, hitching posts, water towers with ladders, and a gallows.

However, the three foot tall replica of an old-style Coca-Cola bottle with even the words made of matchsticks received the most attention.

Rodriguez, a regular at the center, built the display over the last forty years. He brought his projects to the center to show his friends in the wood carving class, which put away their carvings for the day for Rodriguez to teach them how he makes his models.

“Not everybody can do that. You have to be gifted and creative. But he can teach us some techniques,” said Erasmo Vela.

Rodriguez began his hobby when his sister-in-law dared him to make something out of toothpicks. He responded by making her a toothpick bird in a birdcage. Rodriguez enjoyed the project but thought matches may do a better job. Rodriguez said most of his projects take about six months to complete. The large coke bottle took him a year.

“They may not be worth a lot but it leaves my family something to remember their grandpa by,” he said. 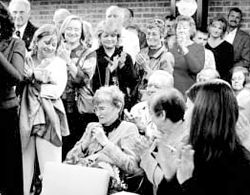 Richard and Kitty Spence devoted 63 years to students in the Aldine Independent School District and their years of dedicated service and loyalty was richly rewarded during the Board of Education meeting on Feb. 15.

On that night, AISD Trustees unanimously approved naming the district’s newest elementary school after the Spence’s. Richard and Kitty Spence Elementary School, located on Gears Road, will open at the start of the 2005-06 school year.

“It’s one of the best things that can happen to anyone,” Kitty said, referring to having a school named after she and her late husband, who passed away in March of 1999. “I think Richard would have been as touched as I am. I can’t thank the board and my Aldine family enough for this wonderful honor. I hope we are deserving.”

The Spences are definitely worthy of having a school named in their honor. At Tuesday night’s board meeting, the boardroom was full of long-time colleagues of the Spence’s, including former AISD Superintendent M.B. “Sonny” Donaldson, former Deputy Superintendent Kenneth Black, former Aldine High School head football coach Bill Smith, and other former co-workers and friends. The Spence’s three children, Doug, Gail and Susan also attended, along with Mr. Spence’s daughter Lockie Spence Goode, the Spence’s two grandchildren, Garrett and Jordy and other family members.

During her remarks after the board approved the naming of the school in her and her husband’s honor, Mrs. Spence said she always considered Aldine to be her second family.

HISD wants to hand over control of Sam Houston High

The schools are the district’s lowest performers in spite of a variety of attempts at change by district officials. Saavedra said he is open to takeover proposals from HISD employees, non-profit, and forprofit agencies. Officials from Knowledge is Power Program (KIPP) and YES College Preparatory Schools said that they would not submit proposals unless they could also control the feeder schools. That is a possibilty that Saavedra is open to as well. Project GRAD (Graduation Really Achieves Dreams), which already has a presence in Sam Houston and Yates, is interested in submitting a proposal.

Founded in 1878, Sam Houston is one of the oldest public high schools in Texas. The school began a few years after the Allen brothers landed on the Buffalo Bayou.Over the years, it has changed names six times and moved from Capitol Street to 9400 Irvington.

Sam Houston has Texas’ oldest high school newspaper, the Aegis, started in 1889. In addition, the world’s first girls’ Military Drill Squad, formerly known as the Black Battalion, but now called the Tigerettes, originated at the school.

Sam Houston High offers one of the most diverse course selections in the HISD. Over one hundred separate courses are offered, including SAT, Advanced Placement, CATE, Special Education, and English as a Second Language.