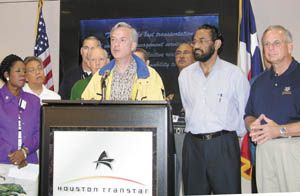 GOVERNMENT LEADERS, including Harris County Judge Robert Eckels at the podium, spoke twice a day since a few days before the hurricane struck, to inform the community on evacuation plans, and the presence of shelters and emergency services that were available, and in some cases NOT available. Also pictured are, L to R, Sheila Jackson Lee, Gordon Quan, Mayor Bill White, Al Green, and Gene Green.

END_OF_DOCUMENT_TOKEN_TO_BE_REPLACED 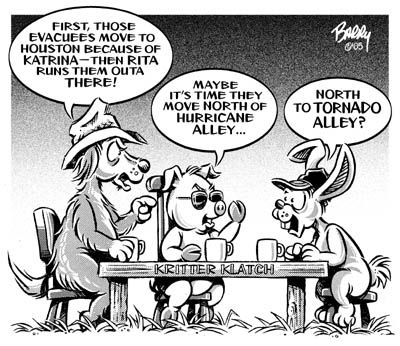 END_OF_DOCUMENT_TOKEN_TO_BE_REPLACED

WASHINGTON  Aldine Independent School District was recognized recently as one of the most outstanding urban school districts in the country and will receive $125,000 in scholarships as a finalist for the 2005 Broad Prize for Urban Education, bringing the districts two-year winnings to $250,000.


Founder Eli Broad was joined by U.S. Secretary of Education Margaret Spellings at the Library of Congress in announcing that Norfolk Public Schools was the winner of The Broad Prize, collecting the top award of $500,000 in scholarships. The $1 million Broad Prize is the largest education prize in the country awarded to the most outstanding urban school districts.
The Broad (pronounced brode) Prize is an annual award that honors the countrys urban school districts that are making the great improvements in student achievement while reducing achievement gaps among ethnic groups and between high- and low-income students. The money goes directly to graduating high school seniors for college scholarships.
In addition to Aldine, the other three finalist districts  Boston Public Schools, New York City Department of Education, and San Francisco Unified School District  also will each receive $125,000. This was the second year Aldine was a finalist for The Broad Prize.
Aldine Independent School District is a truly amazing district, said Eli Broad, founder of The Broad Foundation. Our researchers, Review Board and Selection Jury were impressed with the commitment by the district and community to educate and prepare every child for college or work. And the districts academic results reflect that commitment.
For more information on Aldine Independent School District and the other Broad Prize finalists, go to [insert link].
The Broad Prize was started in 2002. The inaugural winner was Houston Independent School District, followed by Long Beach Unified School District in 2003 and Garden Grove Unified School District last year.
More than 80 urban school districts nationwide were eligible for The Broad Prize this year. The five finalists were selected based on a rigorous review of data compiled and analyzed by the National Center for Educational Accountability. A board of 17 prominent education leaders then reviewed the data and selected the five finalist districts.
Teams of educational researchers and practitioners then conducted site visits at each of the finalist school districts to gather statistical and qualitative information, including interviews with district administrators, focus groups with teachers and principals and classroom observations. The information was presented to a selection jury, comprised of two former U.S. secretaries of education and other leading figures from business and industry, education and public service, to choose the winning district.
The Selection Jury for the 2005 Broad Prize was Jeb Bush, governor of Florida; Henry G. Cisneros, chairman and CEO of American CityVista; John M. Engler, former governor of Michigan; James B. Hunt, Jr., former governor of North Carolina; Rod Paige, former U.S. Secretary of Education; Hugh B. Price, former president and CEO of the National Urban League; Richard W. Riley, former U.S. secretary of education; and Andrew L. Stern, president of the Service Employees International Union.
The Broad Foundation is a Los Angeles-based venture philanthropy established in 1999 by Eli and Edythe Broad. The Foundations mission is to dramatically improve K-12 urban public education through better governance, management, labor relations and competition. The Broad Foundations Internet address is www.broadfoundation.org.

END_OF_DOCUMENT_TOKEN_TO_BE_REPLACED 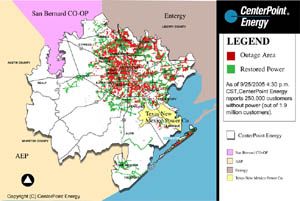 By P.J. WILLIAMS
Though the eye of the Hurricane Rita spared Houston the brunt of the storm, northeast Houston businesses, residents, and shelters still felt its effects.
Both I-45 and Highway 59 looked more like parking lots starting Wednesday night. On portions of the roadways, motorists moved only one mile in one hour. Gas stations and along both freeways were slammed by waves of evacuees long before Rita made landfall. At all open gas stations, cars lined down the feeder roads for a turn at the pumps.


The worst hit convenience stores were those located within easy walking distance of the freeway. Several evacuees heard untrue rumors that entrance ramps to the highways were closed. Rather than risk getting off the freeway, many motorists parked in the grass or shoulder and walked to stores that were in sight. Clerks could not keep the bathrooms clean and store lots were littered with trash.
Many motorists even walked to Jeds ACE Hardware looking for a restroom. Jeds remained open until 7pm Thursday. They sold out of batteries, flashlights, lamp oil and wicks. They did, however, receive a shipment of generators on Thursday morning. Jeds reopened Sunday morning with 45 generators. By Wednesday, all the generators were sold, even those priced over $1,500.00.
The generators were needed by northeast residents who lost electricity late Friday night or early Saturday morning. CenterPoint Energy worked quickly and most residents had power back within 24 hours. But some in the northeast, including High Meadows North and some businesses along I-45 did not receive electricity until late Wednesday.
The Salvation Army on Aldine Westfield was one of the most popular places during the storm. As Rita approached, the center still housed over 50 Katrina survivors. The Salvation Armys staff brought their family members to the shelter Thursday night so that they would be where they were needed, bringing another 40 people to the facility. Several motorists who made it as far as Tidwell and Highway 59 but were low on gas sought shelter at the Salvation Army as well as nearby residents who considered the block and brick building safer than their homes. On Thursday night, the center sheltered 200 people, and 378 on Friday night.
You couldnt walk two inches without running into somebody, said staff member Forest Drexler. Evacuees were housed in all the facilitys rooms: the gym, teen room, library, classrooms, and offices. The shelter has only 130 air mattresses so many people slept on folded blankets.
The Salvation Army was full of excitement during the storm. At 3:00 am Friday, one of the women staying at the shelter went into labor. Drexler said the EMS arrived quickly and took the woman to LBJ Hospital where she had the baby at 4:40am. Later, during the height of the storm, thieves were caught on video breaking into cars in the shelters parking lot. Again, Drexler said the police arrived within minutes, however the thieves escaped. At 7 am Saturday, the Salvation Army lost electricity and most of those staying there returned home. Power returned to the center by 6am Sunday.
Before Rita, the Salvation Army had planned to cease functioning as a shelter on October 1 since most of the Katrina evacuees are now in apartments. The remaining Katrina survivors are to be placed in one centralized shelter. However, on Wednesday, area command named the Aldine Westfield Salvation Army as a shelter for Rita victims.
Were taking anybody that is having any kind of problems: lost power, water, damaged houses, Drexler said.
Many groups and individuals have donated to the Salvation Army, but those supplies were exhausted by the 3,000 Katrina survivors helped by the charity. Thirty new Rita evacuees arrived at the Aldine Westfield shelter on Wednesday, the first day it was opened to Rita victims. Now the center needs more sheets, blankets, towels, toiletries, meat and milk. Weve got lots of little kids and meat is a major thing, Drexler explained. In addition to donations of meat and milk, the center welcomes any group that would like to take charge of cooking dinner for a night using the centers kitchen. At first a lot of people were donating and helping. Now it has slacked off. I guess people are getting tired, he said.
Volunteers of all sorts are also welcome. Drexler has been home only two nights in the last 27 days, and the rest of the centers small staff is working equally hard. The only way we get breaks is if people come in and donate their time, he said. If you are interested in volunteering or donating items, please call in advance at 713-694-5688.

END_OF_DOCUMENT_TOKEN_TO_BE_REPLACED

ALDINE  Four local youths died, and three others were in serious condition after a teen driver lost control of his car while passing another, and crashed into trees on Hill Road, at a reported 90 miles per hour. The accident occured last Friday afternoon, at about 3:20, according to Sheriffs Deputy Lt. Darryl Coleman.
Authorities reported that the driver, who is in critical condition, was Juan Gutierrez, 16, a junior at Aldine High School.
Killed in the accident were Stephany Gutierrez, 5, a student at Carrol Academy; William Coronado, 16, Aldine HS; Mayra Alviso, 15, Sam Houston HS; Melisa Torres, 16, Sam Houston HS.
Surviving were Gutierrez, Rosa Martinez, and an unidentified girl. All occupants were thrown from the car, except the driver, who had on a seat belt.
Lt. John Martin stated that Gutierrez may be charged with negligent homicide, if he survives, or intoxication manslaughter if alcohol is found in the investigation.
Sam Houston High School cancelled their homecoming last weekend as a result of the crash.

END_OF_DOCUMENT_TOKEN_TO_BE_REPLACED

Revised Football Schedule for District 18-5A

Due to Hurricane Rita, the District 18-5A varsity football schedule has been adjusted by the districts executive committee, according to AISD Director of Athletics Daryl Wade. All teams in 18-5A will play their full seven-game league schedule prior to the start of the playoffs.

The entire district schedule will be played and completed on time. League play was to begin the weekend of Sept. 23-24, but due to school being canceled in both Aldine and Spring Branch, those games were played on Friday, Sept. 30 as doubleheaders at both Thorne and Tully stadiums.

The original District 18-5A schedule will resume the weekend of Oct. 21-22 and will conclude the weekend of Nov. 4-5, a week before the Class 5A playoffs are scheduled to begin.
For more information, contact Wade or the Aldine ISD athletic department at (281) 985-6100.

END_OF_DOCUMENT_TOKEN_TO_BE_REPLACED

Fiddle Sticks, pick up sticks.
Ever heard that saying or play the game? There is a game associated with the term from way back before all the electronic games kids play today.
Hint: It is not Jacks, Red Light or May I.
Played pick up sticks this morning; including limbs, branches and fire ants from the back yard as the results of Ritas ravage. Tis too hot to be dragging limbs to the road.
Had to borrow my neighbors chain saw since one of the twins borrowed ours about four years ago. You relate?
Problem with disasters like Hurricane Rita is that the Mrs. has to go to work as soon as she can after it occurs.
Her cats miss her, so they come to me for attention and love. My petting makes Four Dog come stick his nose in the middle of the loving.
With her not being here, we aint eating as good. Not that she is not the cook, but the cooks recipient. A Smart Ones frozen dinner is on the main menu from the microwave tonight. Aint much left except licking the plastic bowl, and Four Dog licks it all around the living room.
When she gets home, it will supper at Antonios with a light dinner so she will not fall asleep when she gets home.
Fill her full of food and she goes to sleep, so what choice do I have?
Shed be just like Four Dog and lay up just next to you feeling close. If I was a cat Id start purring.
Be barking at the moon in the morning.