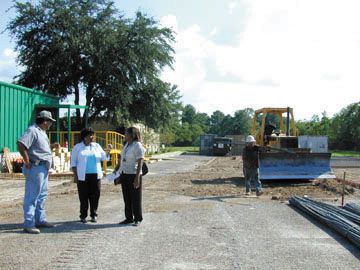 By P.J. WILLIAMS
It is not every day that the pouring of a new parking lot gives reason to celebrate. But then again the Aldine YOUTH Community Center is not a typical place. For years, YOUTHs parking lot has contained potholes as large as a car length scattered across its surface. Drivers maneuvered across the obstacle course of holes and after a rain, the lots puddles created another challenge.
Weve been praying for a new parking lot for at least eight years or more, explained YOUTH founder and director Sylvia Bolling.

We have patched. We have filled. We have done everything we can to make it so that people could get here to get our services.
YOUTH tries to bring all the services area residents need to one place in order to eliminate the need to spend all day on a bus making connections to different service centers. The center offers a food pantry, probation, WIC, ESL and GED classes, afterschool care, summer camp, defensive driving, exercise classes, and more.
But the parking lot was the last barrier.
Last week work began on the new, concrete lot and already the centers staff is planning a celebration party to thank all those who helped. I tell everybody, Look it is finally happening! Bolling exclaimed.
The answer to Bollings parking lot prayers came through the centers relationship with the Get-Together.
The Get-Together is a group of religious, business men and women who meet once a month for lunch to discuss how they can use their business contacts to help a select group of area non-profit groups. In May 2004, a member of the Get-Together brought Royce Hassell to Aldine YOUTH to meet Bolling. After driving over the parking lot that looked more like a minefield, Hassell offered to donate his labor and the services of his business Royce Hassell & Company Incorporated. When Aldine YOUTH took out a loan to start the Youth Taking Care of Business School, part of the loan package included money for concrete and materials.
The new parking lot will not only be smoother; it will also be bigger. Concrete will now cover the grassy area between the business school and the resale shop. For the meantime, that area will offer additional parking, but Bolling has bigger plans for the concrete pad. This is what you call vision, she said. Bolling is already talking with a contractor who is interested in donating labor to build a pavilion over that space.
Aldine YOUTH is located at 4700 Aldine Mail Route and cab be reached at 281-449-4828.

END_OF_DOCUMENT_TOKEN_TO_BE_REPLACED 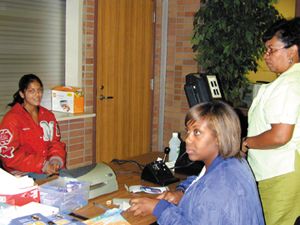 By P.J. WILLIAMS
METRO recently came to MacArthur High School to provide students with an easy way to get a METRO Go Card. During the students lunches, METRO took the students pictures and printed the cards on the spot. The cards give students up to age 18 60% off any ride on the METRO buses and rail lines. That makes a one way ride only 40 cents instead of $1 and a day pass just 80 cents rather than $2.


METRO will again offer Go Cards in the northeast area on Thursday October 13 at Aldine High School between 11:30am and 1:30pm. If students are unable to get the METRO Go cards at school, they can always buy one at the downtown ride store, 1900 Main Street near Pierce. The ride store is accessible by taking any bus that goes downtown and then transferring to the light rail.
While the Go Card is valid on any METRO Route, most students planned to ride the new route #59 that travels Aldine Mail Route between I-45 and Highway 59. Eventhough it seems like a small route, there are a lot of connections to it, explained METRO community liaison and AISD school board member Art Murillo. The route provides service two county libraries, nine AISD schools, the Aldine Health Center, Aldine YOUTH, the Social Security office, plus grocery stores and pharmacies.
Since route 59 began on June 1 it is more than half way toward its ridership goal. The new route has eight more months to reach its goal before the route is reconsidered. Murillo said that METRO ridership is typically low in the summer and expects ridership to increase. Fall is generally the busiest period, he said. Currently the route runs only on weekdays, but if ridership increases, weekend service will be considered.

END_OF_DOCUMENT_TOKEN_TO_BE_REPLACED 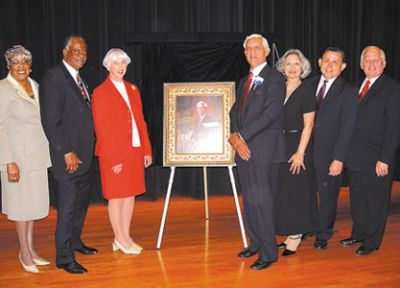 Close to 600 family members, friends, school administrators, community members, parents and students gathered on Sunday, Oct. 2, to dedicate Aldine ISDs newest middle school, Plummer Middle School.
The school is named after former Deputy Superintendent Willman J. Bill Plummer, who dedicated 36 years of his life to the students and staff of Aldine ISD. Plummer retired in 2003, and in May of 2005, the Aldine ISD Board of Education unanimously voted to name the districts ninth middle school in his honor.

Plummer began his educational career in Aldine ISD in 1967 as a physical education teacher and coach at Drew Junior High School (now Drew Academy). Seven years later, he accepted an assignment as an assistant principal at that same school. In 1975, his leadership and organizational skills caught the attention of Aldine ISDs administration when he was named director of buildings and properties. In 1981, he was promoted to executive director of buildings and construction and in 1986 he continued his rise as one of the districts foremost leaders when he was named assistant superintendent of buildings and construction, a position he held for 13 years until he was named the districts deputy superintendent of operations.
The dedication ceremony began with a welcome from Plummer Middle School principal Luis Pratts. Following Pratts welcome, Plummer Middles LOTC color guard presented the colors. Plummer students Jerlisha Williams and Anam Ahktar led the audience in reciting the Pledge of Allegiance and the Pledge to the Texas Flag, respectively. Plummer teacher EmmyLou Ramirez then sang the National Anthem, which was followed by the playing of America the Beautiful by the Plummer Middle band. The Plummer Show and Performing Choir then sang The Rose, which was followed by the invocation given by Rev. Rawlin B. Enette of St. Peter Claver Catholic Church.
After the audience was treated to a video performance produced by Plummer Middle teacher Nick Kesler, AISD Board of Education President Rick Ogden then accepted the school on behalf of the board. Following Ogdens acceptance, Plummer students Royce Brooks, Bryan Walker, Tannia Rivas, Kristie Vasquez and Maria Bello accepted the school on behalf of the student body. Parent and PTA member Guillermina Gil accepted the school on behalf of the parents, while Lisa Smith of Washington Mutual accepted the school on behalf of the business community. Plummer teacher Debra Jones accepted the school on behalf of the Plummer staff.
It was then time for the man of the hour to deliver his response. Plummer thanked the board for naming the school in his honor and a host of former colleagues, including current Superintendent Nadine Kujawa, former Superintendents M.B. Sonny Donaldson and M.O. Campbell, Deputy Superintendent Dr. Archie Blanson, Assistant Superintendent and General Counsel Jonathan Hantke and a host of others for their support over the years.
Plummer also acknowledged his late wife Anne for her support in helping him succeed as an educator, along with his two daughters and late son. He also thanked the numerous family members who were on hand to share in his joy.
He added he was fortunate to work in the same district for more than four decades.
I came to Aldine 38 years ago and never looked back, he said. The Good Lord placed me in the midst of good people and I am thankful for that.
Plummer than challenged the students in the audience to take advantage of the tools they have been given to make the most of their lives.
Study hard, find good role models and good friends, he said. Give yourself a good foundation.
The dedication ceremony concluded with students Ronald Edwards and Tyresha Henix unveiling Plummers portrait and closing remarks from Superintendent Kujawa. U.S. Congresswoman Shelia Jackson-Lee also attended the ceremony and presented Plummer with a Congressional certificate.
Plummer also received gifts from the Plummer Middle football team, a sketch from art student Carlos Peraaza and a song performed by choir director Megan Truelson.