Walk the Line is middle of the road 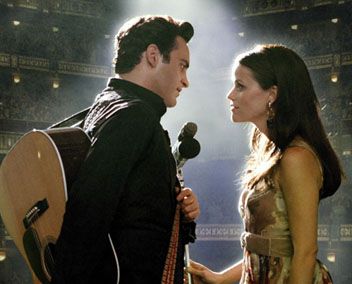 Joaquin Phoenix is no Johnny Cash. But then, who is? Therein lies the problem with “Walk the Line,” director James Mangolds biopic of the legendary perfomer.

Rather than have Phoenix lip-sync to recordings of Johnny Cash, Mangold has the actor re-create the performances himself. Big Mistake. Phoenix tries hard to mimic Cashs voice and mannerisms, but he falls painfully short, especially in the singing department. To Phoenixs credit, though, he does do an admirable job of conveying that cocky, onstage Cash presence.

Another challenge for Mangold is how to tell the story of a man whose career spanned six decades. He gets around this by concentrating on the early years of Cashs career leading up to his legendary comeback concert at Folsom Prison in 1968.

The film begins backstage at Folsom Prison as Cash is preparing to go on. He isnt in a dressing room, but rather the prison workshop. He stares at a circular saw, and the film goes into flashback mode, back to Cashs turbulent and traumatic childhood. His father (Robert Patrick) is an abusive alcoholic, and when Johnnys brother dies in a sawmill accident, his father blames Cash for his death.

Fast-forward a few years. After a stint in the Air Force, he marries a woman named Vivian (Ginnifer Goodwin), who tries to push him into a life of suburban normalcy, but Johnny instead takes a couple of his buddies to Sun Records to record a gospel song. The audition is a bust until Cash and Co. belt out an unrehearsed version of “Folsom Prison Blues.”

Cash gets signed to Sun Records, goes on tour with Elvis (who gets Cash hooked on amphetamines) and meets June Carter (Reese Witherspoon). Cash adores June, but circumstances (like her already being married and his becoming an alcoholic and junkie) keep getting in their way.

The romantic angle of the film couldve been so much more if there had been more chemistry between the two actors. I went into this film prepared not to like Witherspoons performance, but she does such a spectacular job, you cant help but fall in love with her.

“Walk the Line” is an almost good/almost bad movie. Its title sums up the film perfectly. When the performances are right on, the film shines, but the flashbacks are so brief and episodic that often the movie feels more like an E! True Hollywood Story with a budget rather than a dramatic, polished motion picture.

If youre a fan of Cash, I think youll be disappointed. But the casual filmgoer could see it at a matinee and not feel cheated.