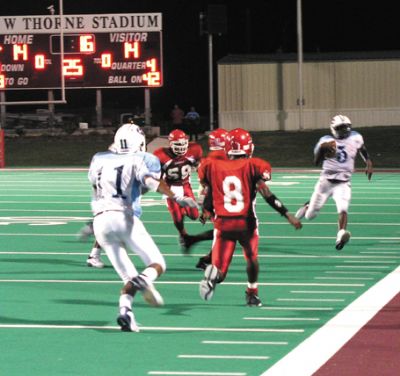 By GILBERT HOFFMAN
Lightning struck twice Friday night, once on the horizon to delay the start of the MacArthur/Aldine game, and once in the final seconds when the Mustangs kicked a 25 yard field goal and broke the 4th quarter tie, with a 17-14 victory.
Although the inclement weather, including some rain and lightning, kept fan attendance lower than normal, those who were there saw a well-played, well-coached game. It included some exciting moments, such as a 77 yard run by MacArthurs Isaak Lewis in the 2nd quarter for a touchdown that put them ahead 14-6 at the end of the first half.
Scoring started in the first quarter, with a 3 yard run by Daron Thomas, the tall Aldine QB who carries himself somewhat like Vince Young of Texas. Although MacArthur scored twice in the second quarter, it seemed like the Mustangs set the momentum of the game. They were able to complete 9 passes for 66 yards, as well as their running game.


In the second quarter, the Generals scored on a 21 yard run by Connor, as well as Lewis run.
The third quarter was scoreless by both teams, but they executed well and kept the opponent on edge. In the 4th quarter, Aldine scored at 7:19 left in the game on a Wiley 5 yard run, and then got the ball back after MacArthur failed to move it for first downs. Then they kept up the pressure, with a combination of end runs and pass plays, and got close enough, with only a few seconds left on the clock, to seal the game with the field goal and win 17-14.
Aldines Thomas rushed for 124 yards, and MacArthurs Connor for 98 yards. Aldines Thomas passed for 66 yards on 9 completions. MacArthurs Washington passed for 20 yards on 2 completions. 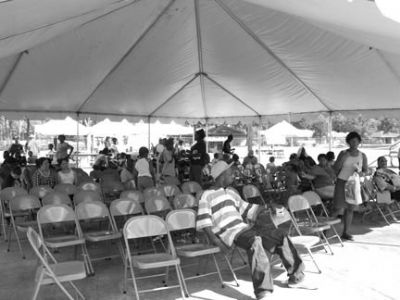 The North Forest administration, and Superintendent Dr. James Simpson, held a Community Block Party last Saturday, to let parents and the community get to know administrators, staff and teachers better.
This was a step in the continued effort to communicate with North Forest, and gain the support of parents and others who have been critical of the district and its well publicized problems.
The event included free food and drinks, games, many door prizes, entertainment for children and adults, moonwalks, Rainbow the Clown, and face painting. It was held in the playground and field next to the administration building at Langley and Homestead.Music was provided by Too Laid Back, and food was provided by Fiesta market.
The Houston Astros and others provided a large number of door prizes. Highlights of the raffle prizes were autographed baseballs, by current players such as Brendon Backe, and famous old-timers such as Jimmy Winn.

Several hundred adults and many more children attended the two-hour event, which was considered a success.
The party followed the first of four community walks. School officials and student volunteers walked neighborhood streets distributing door hangers that featured information about the districts programs and inviting the community to volunteer in the district.
The next walks scheduled for October 21 and November 4. Breakfast and lunch will be provided. Volunteers should arrive at the administration building by 8:30 am. 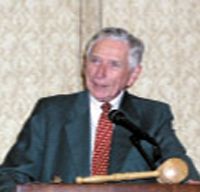 By Gilbert Hoffman, Publisher
Drayton McLane, Jr., owner and CEO of the Houston Astros, was the featured speaker at the monthly luncheon of the North Houston Greenspoint Chamber last week. He highlighted the exciting season that the Astros have now completed, but his message was about baseball, business and ethics that can be applied to both.
McLane spoke of the strength of the Free Enterprise system, and how you can excel and do big things in this country, in this business climate. His own climb to success is an example, but he emphasized that it was integrity and honesty, the desire to do the right things, that lead his direction in his business career.

He spoke to the chamber members at the luncheon about leadership. A leader who is one that is trying to find the future, he said. A leader lifts others to a place they wouldnt get to otherwise. A leader must also be a risk taker, he said.
McLane recounted how he came from a small town, Cameron, in Texas. Even today, he prefers living in a smaller community, Temple. He started in the familys grocery distribution business. He believes it grew because he had a clear mission statement, which he talks about every day in his grocery business and his baseball business. His principles are: Honesty, Integrity, and be responsible for what you do.
McLane became involved with the Houston Astros, as an investor owner, in 1993. Originally asked to be a partner by Texas Commerce Banks Ben Love and Randalls Bob Olmstead, he decided to take on the team on his own, and to run it with his value system.
He has been involved in baseball now for 14 years, and says he loves it. He attends almost all home games. He noted that this year, while disappointing in some ways after reaching the World Series last year, nevertheless has drawn a huge fan support base, with over 3,000,000 attendance reached.
McLane talked about the Astros organization, and the season. He brought with him marketing director John Sorentino, who has been with the team 21 years. The team now has 6 teams in their farm system, he said, and thinks the future of the team depends on developing good talent from within. That includes the 172 players now in the minors. He noted that most players last in the minors about 5 years, and if they get to the majors, only 18 percent are able to stay for more than 1 year.
In closing, he emphasized the need for integrity. As his first manager, Art Howe said, Baseball is an individual sport, that teams play. The best players, such as Roger Clemens, take reponsibility for their individual performance, and put their greatest effort into it.