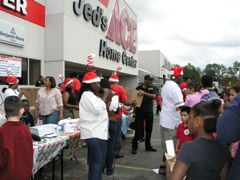 NORTHEAST HOUSTON Hundreds of needy families in this area will have a happier Christmas, thanks to the efforts of the Macedonia Outreach organization, Jeds Home Center, and many other sponsoring companies.

Last Saturday these groups got together to give food, toys, and computers to needy families that signed up with Macedonia to receive help at this holiday season.
Sponsors included Macedonia Outreach Center, Jeds Home Center, Houston Food Bank, I-45 Signs, NHG Chamber of Commerce, North Houston Bank, Aldine Improvement District, North Houston Frontiers, Saturn, Randy Fine Foods, Chevron, Technology For All, Mattco, Schlumberger, VM Direct, Nabors Industries, Geico, and First Continental Bank.
The event included a raffle, with two computers awarded to Shantelle McPherson and Maria Carreon, and many special toys given away to families.
Another feature of the day was the participation by retired Harlem Globetrotters, who signed autographs and helped distribute the food packages.
The distribution was held in the parking lot of Jeds Home Center on Aldine Mail Route.
Other features of the day included face painting by Macedonia Outreach, and Jeds Clyde Bailey distributing popcorn all during the event.
Macedonia director Kathy West thanked all in the community that helped bring holiday joy to families in need.

This is the finale for Two Cents Worth and 2006, hope you enjoyed the previous ones.
So, have you got all your Christmas shopping done and bought tacky gifts for those you do not care for?

Proper etiquette calls for a thank you to the gift giver and a smile on your behalf. Once its all said and done, donate the item to the Rotary for its annual auction come February.
We received an electric skillet from a relative who had been recently married. Inside the skillet was a card to them from whomever gave it to them. At least its something that is used in this house.
The Mrs. received a cordless iron one year from me but mind youit was per her request as she wanted one.
My ole buddy Ruby told me her Jim had given her a box of kitchen items one year and added, The damn box is still in the garage too.
Had mentioned to my sister what I got the Mrs. this year for Christmas and older sister said, Id stick it up your &$$ too.
How about a baseball hat with a fake pony tail out the back?
How about a used vacuum cleaner?
Another bud says he request money, give me money. Said hes very picky, odd to fit and it is hard to please as a stick in the mud. His 60th birthday is coming in January and being a diabetic, guess hell receive something sweet from his bud in Texas.
How about a T-shirt with a Unicorn on it from a convenience store with the price tag attached?
How would you like a years subscription to this newspaper?
One gal said she received a six months supply of diet pills and the $200 for them showed up on her credit card.
Another said she received a Lighthouse cookie jar that once opened; it made the sound of a fog horn and scared the liver out of you.
Aint no joke, I received a chunk of coal one year, boxed and gift wrapped.
One said she received a paper shredder for Christmas. Said she should have used it on their marriage license.
Of course some say underwear is the worst Christmas present, but I look forward to some new drawers each year.
Some really tacky gift suggestions include: Beano, adult diapers, a back shaver, nose hair trimmer, rectal cleansing pads, menopause pills, and a pair of socks.
Just think about it for ten more days and youll find out if youve been naughty or nice.
Merry Christmas.
Adios

NFL contenders hope Santa is good to them this weekend

Tis the week before Christmas, and all through the land, visions of playoff berths are swirling in many an NFL players head!
Yes, the Jolly Fat Man is about to deliver his goods on Christmas Day, but NFL players and coaches know what they want this year: a playoff berth.